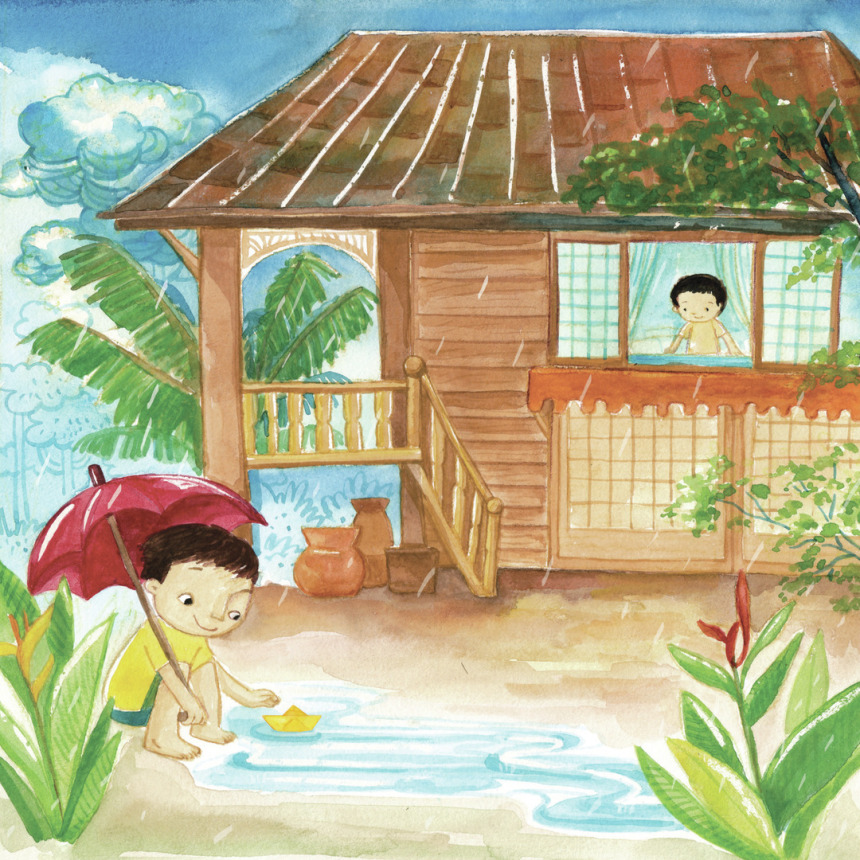 Alvey lay on his grandma’s bed.  He listened to the rain drops hitting the corrugated tin roof of her house.  They sounded like marbles falling.

The boy got up and looked out the window.  From Lola Imang’s bedroom he saw his brother, Danny, playing in the water.  He had made a paper boat and was floating it in one of the puddles that had formed near grandma’s house. 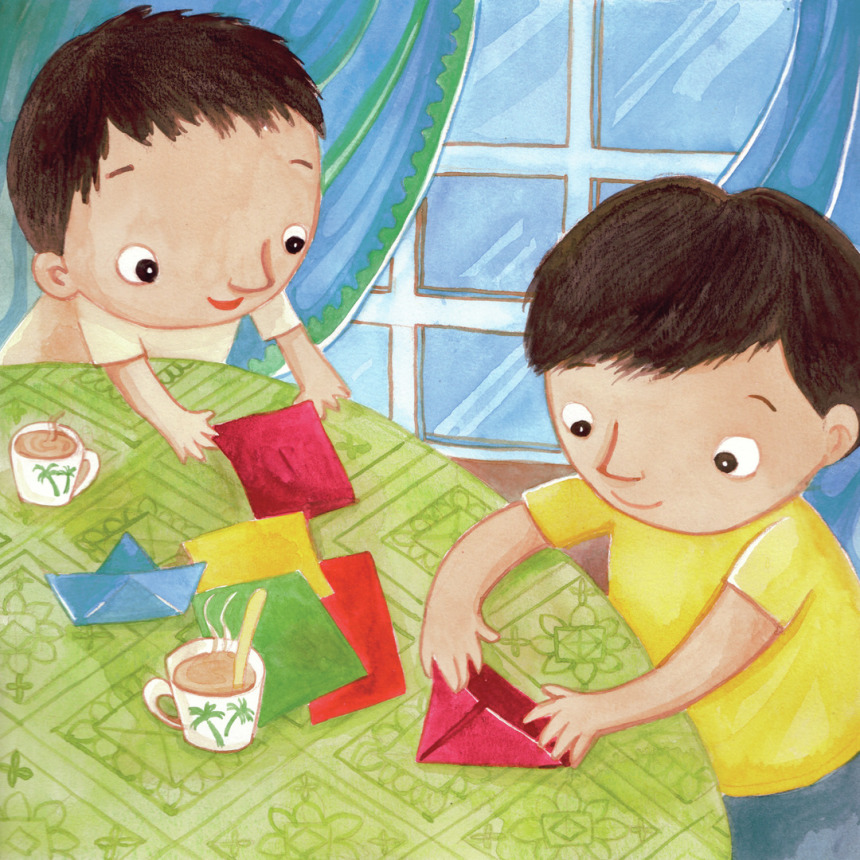 When Danny came in from the rain, Alvey asked him, “Can you make me a boat, too?”

“Sure!” his brother said.  Danny took colored paper from his school bag and brought them to the dining table.

“Okay,” said Danny. He took the red paper and folded and folded until a little boat appeared.  The paper ship had a flat bottom and thick sides.

“Here,” he said, and handed Alvey the boat. 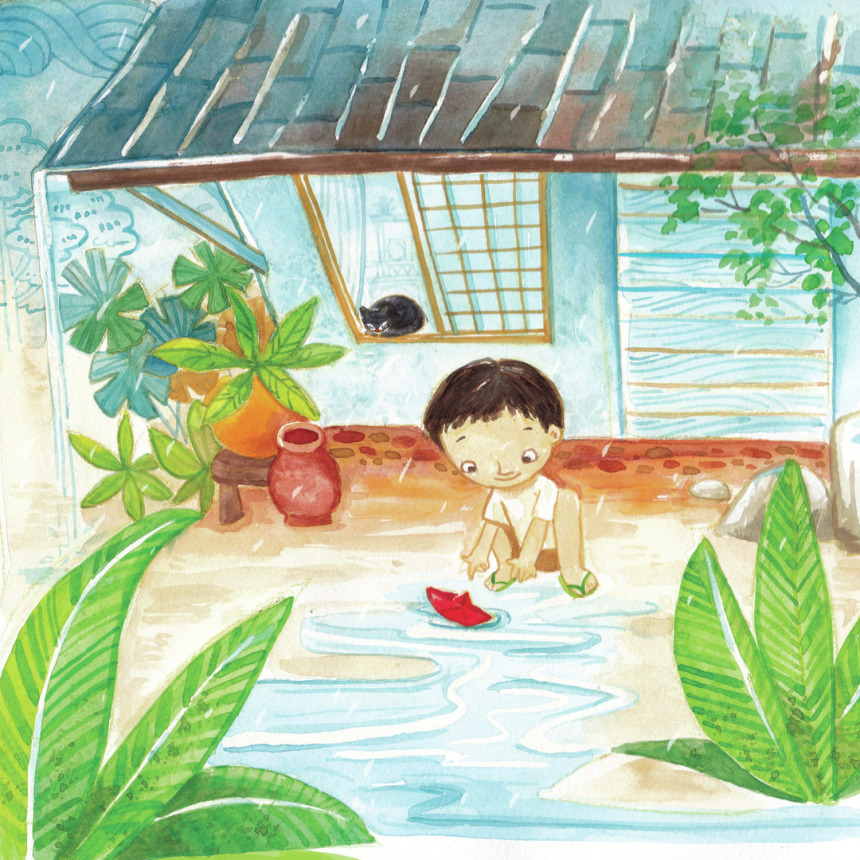 Alvey slipped into his green tsinelas and ran outside.  He walked along the side of the house, the part that was protected by the roof overhang.  He knelt down and placed the boat on the water in one of the rain puddles.  It bobbed then floated on the surface. 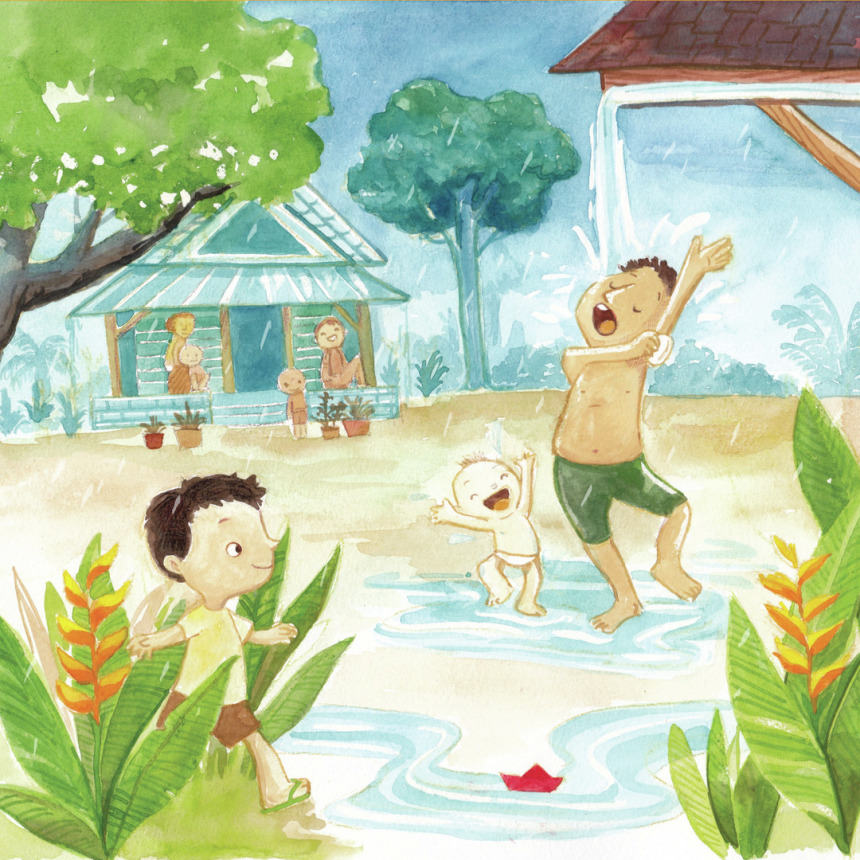 The rain kept pouring and soon there was a small stream running along grandma‘s house.  It ran through the puddle where Alvey was playing with his boat.

Oh no! Alvey worried.  I hope the stream doesn’t sink my boat!

But the boat just spun around a couple of times and then was carried by the stream out of the puddle.

As Alvey followed his boat, one of the neighbors ran out into the rain.  It was a man, clothed just in his underwear.  He ran under the rain and got himself all wet.  Then he lathered himself with some soap.  The man’s three year old son ran outside and joined him.  They weren’t going to let the rain shower be wasted!  People from nearby houses watched and laughed. 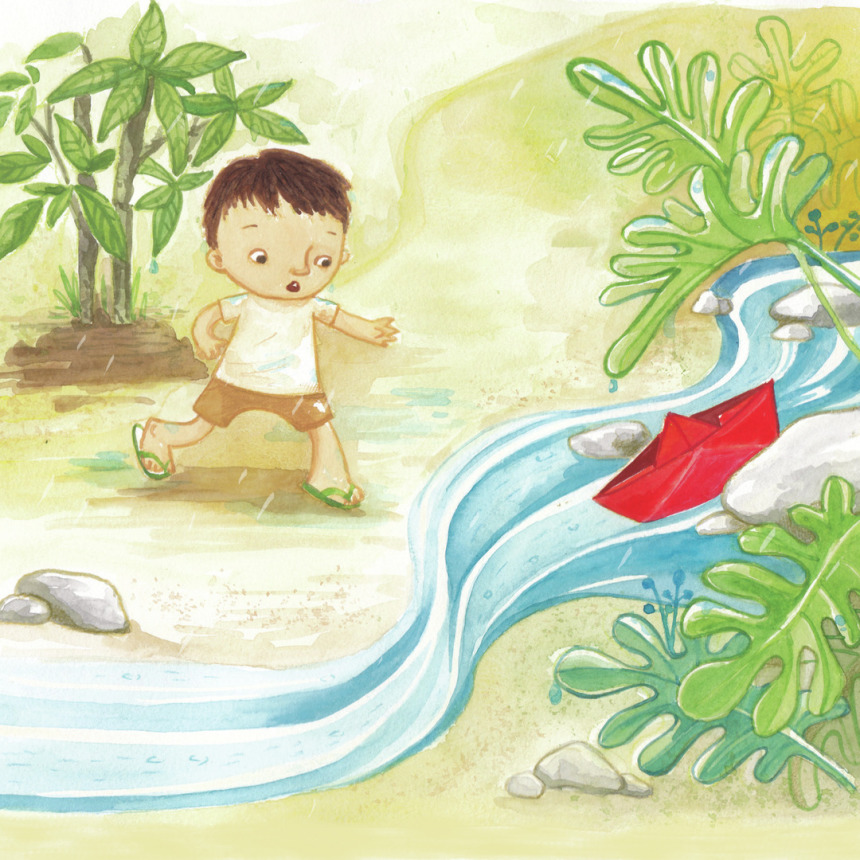 Alvey followed his boat.  He had now left the protection of the roof overhang.  But the rain became lighter, so he didn’t get too wet.

Oh no! Alvey saw a few big rocks coming up.  I hope my boat doesn’t sink!

Sure enough it hit one of the rocks.  However, the boat didn't go under.  It just got stuck between the current and the rock.  The water pinned the boat against the rock, which was too big for the boat to find its way around.  Alvey picked it up and set it free on the moving water.  After spinning around a couple of times, the boat headed downstream. 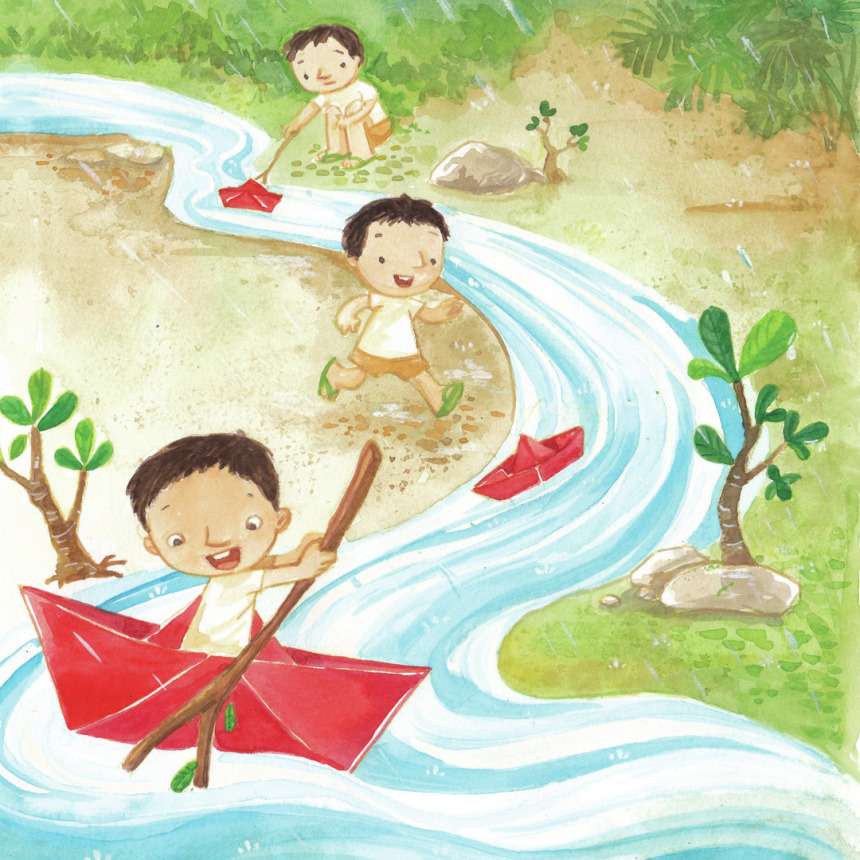 Oh no! worried Alvey.  There’s a calm pool up ahead!  If the boat goes there, it will never get out!

And sure enough, the current that was carrying the boat fed it straight into the pool.  It wandered the puddle aimlessly.  Alvey picked it up and turned it over to dump the water that had gotten inside.  The boat was getting soggy.  He worried that it might no longer float.  Despite its soft state, he placed it back on the flowing stream.  It didn’t sink and kept on going!

The boat swirled around other stones and twigs and pools.  Alvey followed and watched it bob and weave and spin on top of the stream until the end of grandma’s lot. 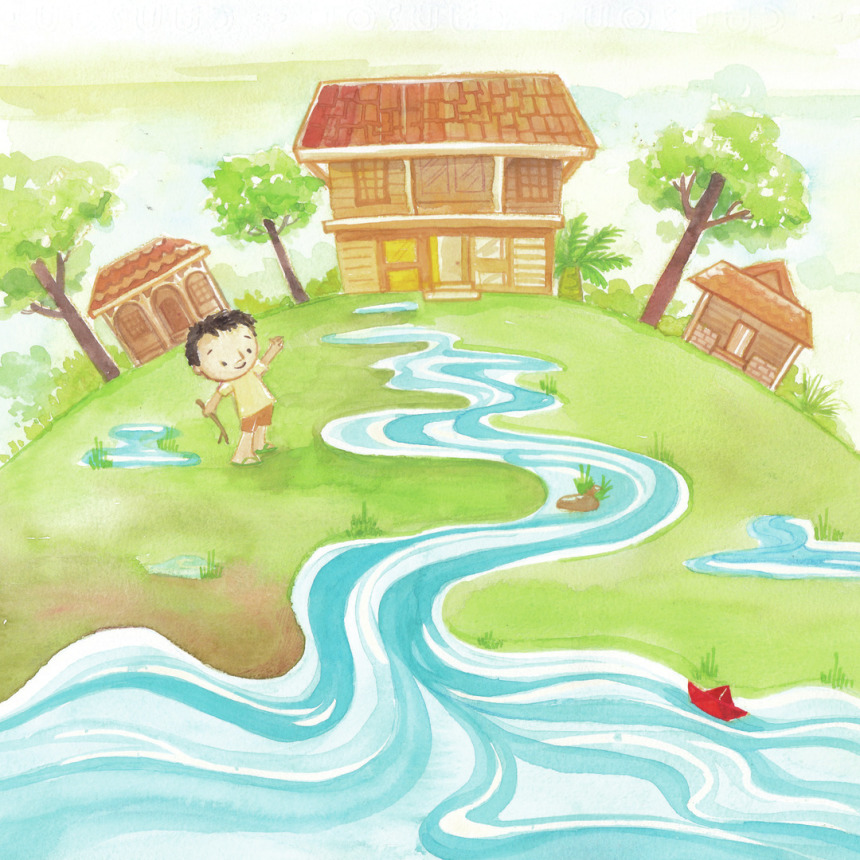 Lola Imang’s house was built on the top of a hill.  Alvey watched the boat float down, down, down.  It became so small he lost sight of it. 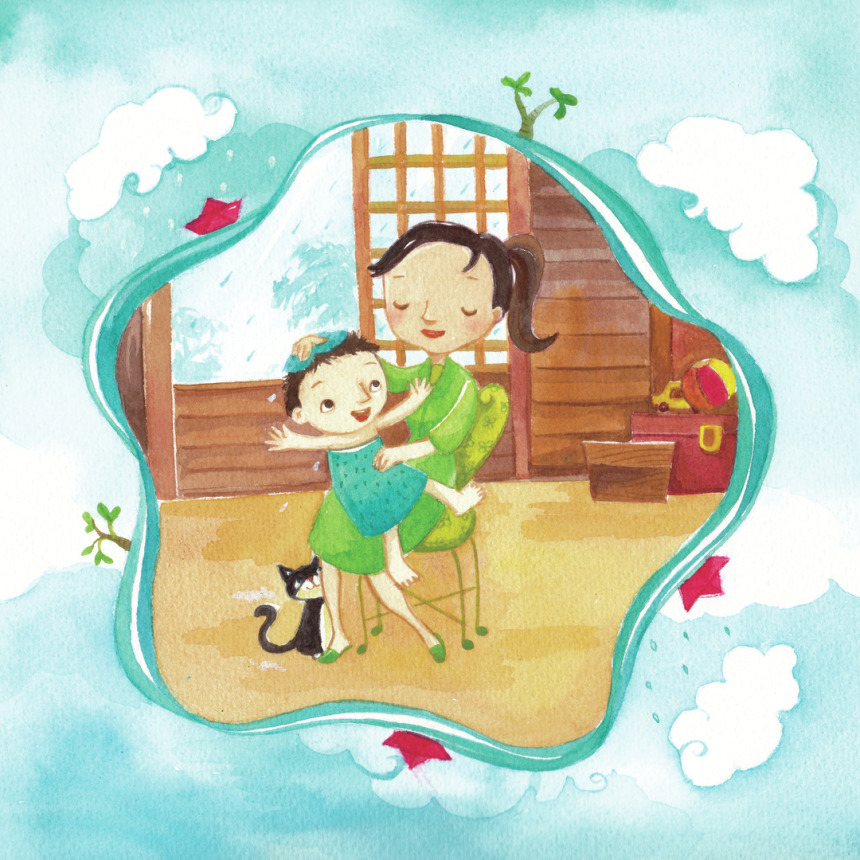 “Oy!” His mom shouted from inside the house.  “What are you doing out there getting all wet?!  Get inside!”

Alvey ran inside and his mom dried him off with a towel.

“I made a boat and it floated all the way down the hill, Mom!”

“Ahh!  You are a great sea captain, Alvey!  Now go upstairs and put on some dry clothes!” 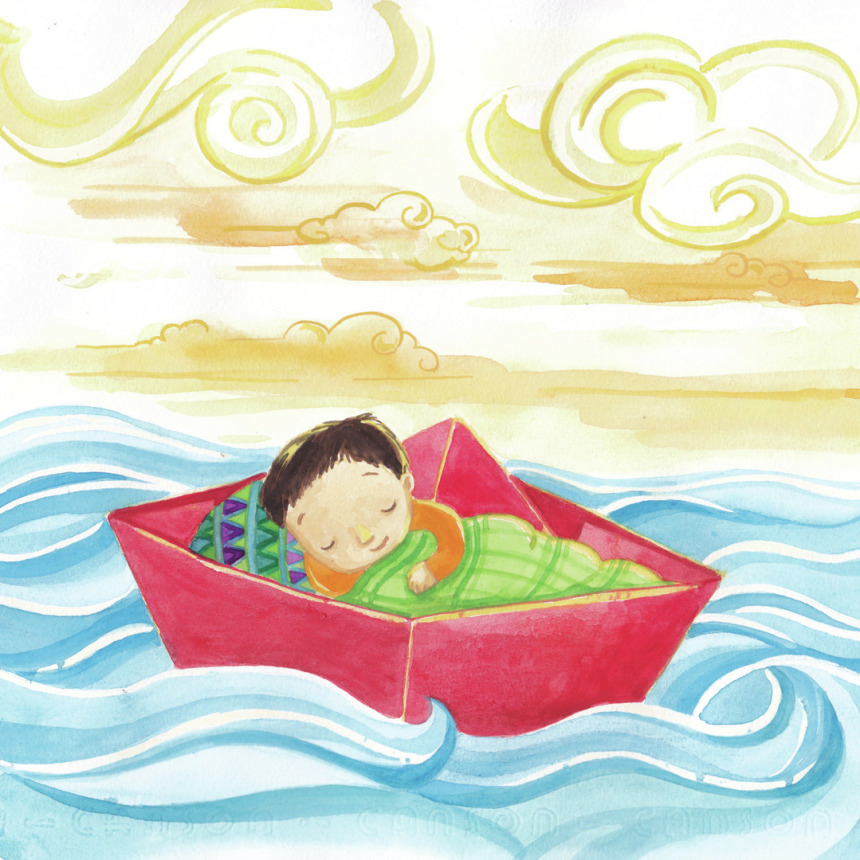 Alvey ran up the stairs and put on his favorite orange shirt and blue shorts.  Then he lay down on his grandma’s bed and thought about his rain boat.

Will my boat make it all the way out to the sea? he wondered.

Alvey thought about it.  And smiled.