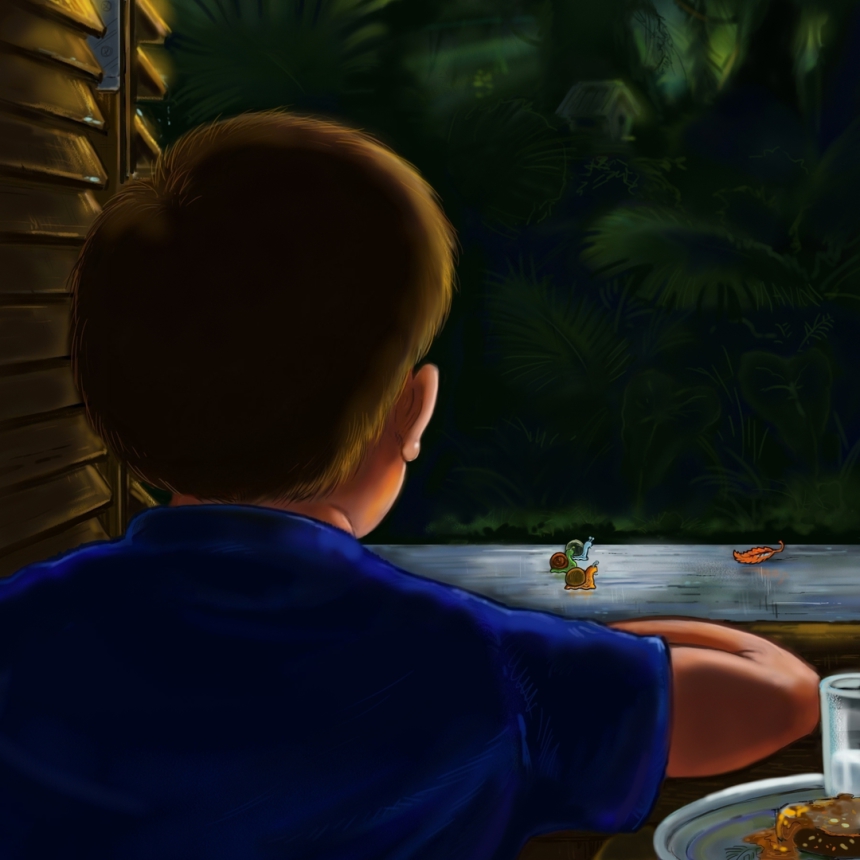 Alvey finished his breakfast of sugar and butter on toast.  He pushed off his chair and made his way to the living room window sill.  It had rained early morning, but the rain had stopped and the sun was starting to come out of the clouds.  He saw a few snails on the sill.  He loved watching them.  The tiny creatures moved in such slow motion they hardly seemed to go anywhere.  But if Alvey went away for a little while and then came back, each snail would be in a totally new location---sometimes on top of one of the potted plants or clear on the other side of the window sill. 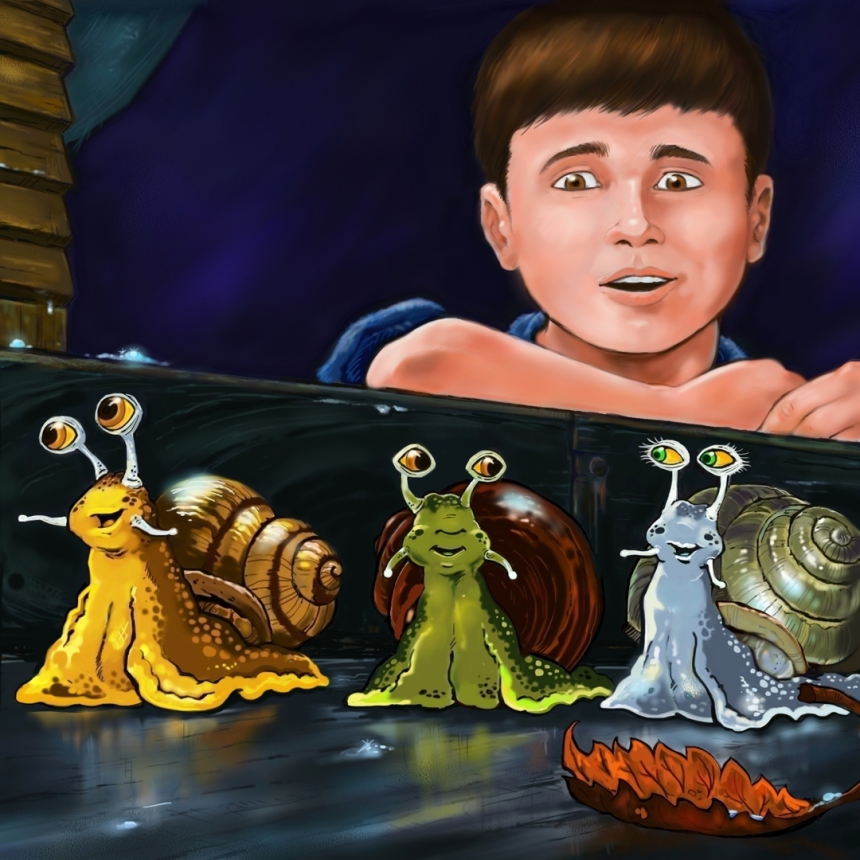 Kaboor, Jami, and Tor were gliding across the gray window sill, enjoying their early morning crawl.

"I just love this wood after a good rain," Tor said.

"Jami and I are going up the baby bonsai today, Kaboor," Tor said.  "Would you like to join us?"

"No thanks, you two.  I think I'll follow the Great Light towards the wall.  See if any pools of water have collected."

"Be careful of getting too close," Jami warned.  "You know what happens to us snails if we venture into the Great Light."

"We'll see you later in the day, then."  Tor and Jami crawled left and made their way towards the flower pot. 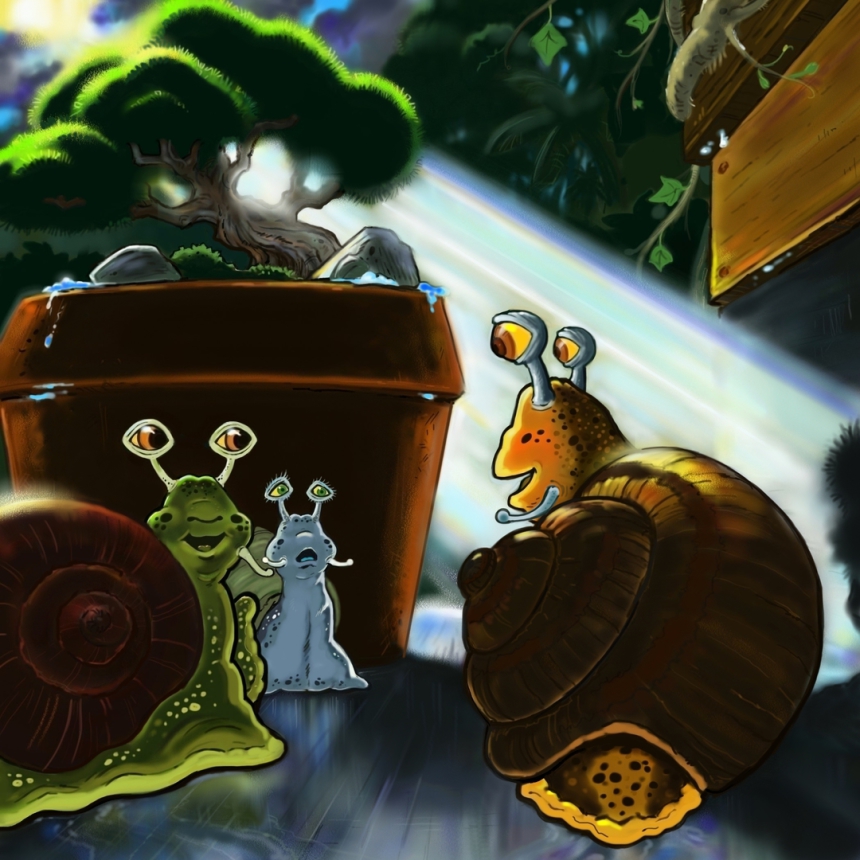 Kaboor kept crawling straight towards the Brilliance in front of him.  He was thinking more of the Great Light recently.  He had heard the stories since he was very young.  How snails dry up and can't move if they go into the Great Light.  How they become hard and rigid.  But lately he's thought of other things.  Like how the flowers turn towards Its direction.  How the Great Light shimmers on the water.  How the grass, trees, and other animals---the birds, lizards, cats---all seem to thrive in It.  He couldn't stop imagining how wonderful it would be to crawl in It, to glide in It!  And although he told Jami and Tor differently, today Kaboor had made up his mind to actually go into the Great Light!

Kaboor glided and glided.  It seemed like a very long time, but finally he reached the ocean of Golden Light.  Dust particles were floating on it.  The ground in front of him went from light gray to brilliant yellow.

Kaboor slowly slid into the shining yellow radiance.  He immediately felt the warmth on his body.   "Ahh!" he gushed.  He couldn't help but saying and feeling "Ahh!"  His whole body said, "Ahh!"  It was wonderful!

And then he saw it!  As he turned his face towards the warmth of the Great Light he saw a golden orb, about the size of the moon, but bright yellow instead of white.  It was so bright, he could look at it only for a few seconds before it hurt his eyes.  And it was Magnificent!  He wondered, "Is this where the Great Light comes from?  The Great Light comes from an orb just like the moon?  I have lived my whole life not knowing something so basic?  And not having seen something so Grand?  Wait till I tell the whole tribe!" 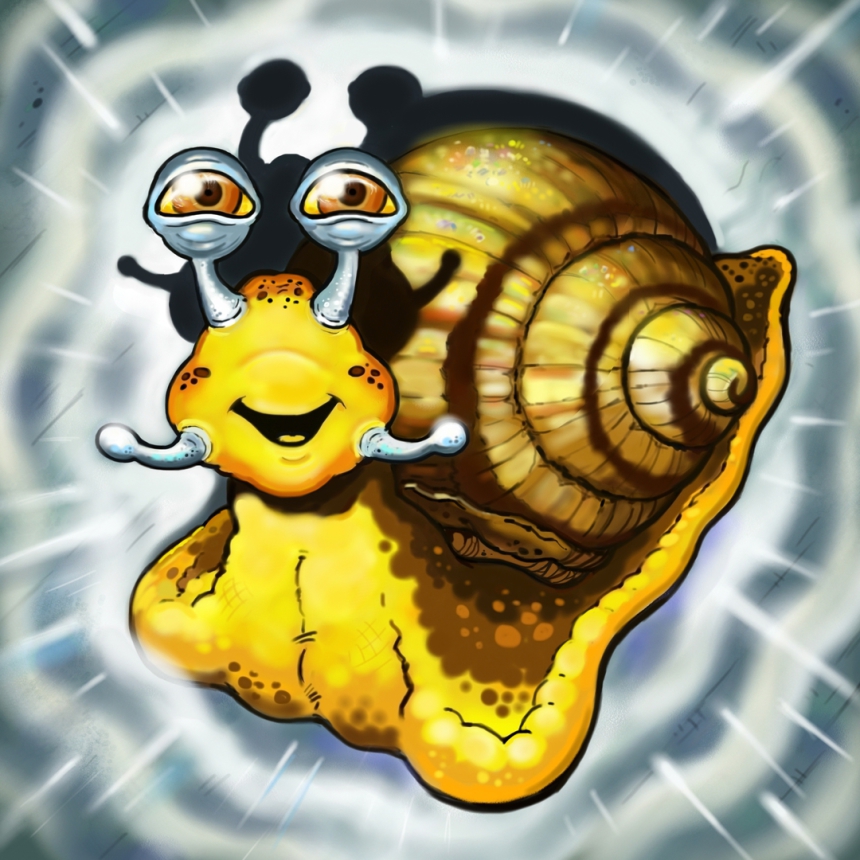 Kaboor felt free and carefree.  He lost himself as he crawled and crawled, gliding and sliding, feeling the warmth of the Great Light which he now knew came from a Great Orb.  He let its warmth bathe him all over.  Soon he felt like He was part of the Great Light, and that rays of light were coming off his face, his body, and his shell.

Then it happened.  Kaboor's foot became stiff.  Schlop...And stiffer.  He soon found he couldn't ripple.  He couldn't move his foot.  He couldn't glide!

Kaboor tried and struggled, but no matter what he did, he could not get his foot to move.  "Ohh!" he groaned.  And he was sad.

"Jami and Tor were right!" he screamed.  "I should have listened to them!"

He was silent for a while.

"But I was right, too," the thought came to him.  "Being in the Great Light is incredible!  It's so warm!  So accepting!  So freeing!  I wouldn't trade it for anything!  I am glad I followed my heart!  Even if it means..."

Now he started to feel the rest of his body getting stiff and dry.  Kaboor closed his eyes.  And prepared to die. 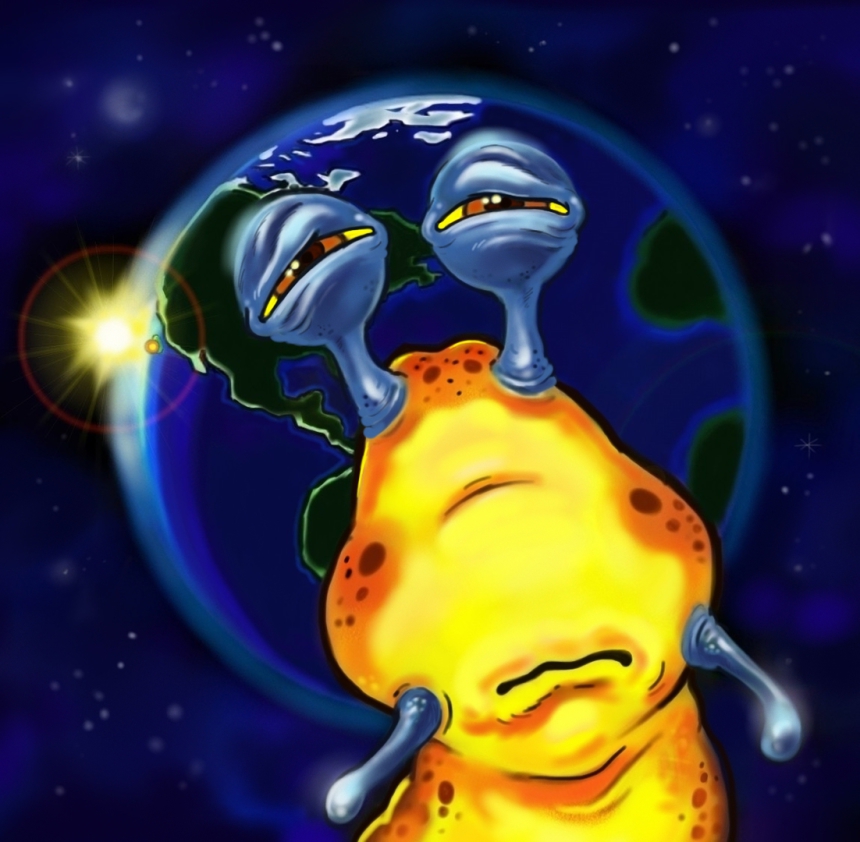 Jami and Tor had reached the rim of the plant pot when they looked out in the direction of the Great Light.  They looked for Kaboor, but could not find him.  Then Tor saw a small dot on the sill, inside the Great Light.

"Oh my!" exclaimed Jami.  "It can only be him!  He must have gone crazy!  We must help him!"  They immediately changed direction and headed back down, worried about their friend. 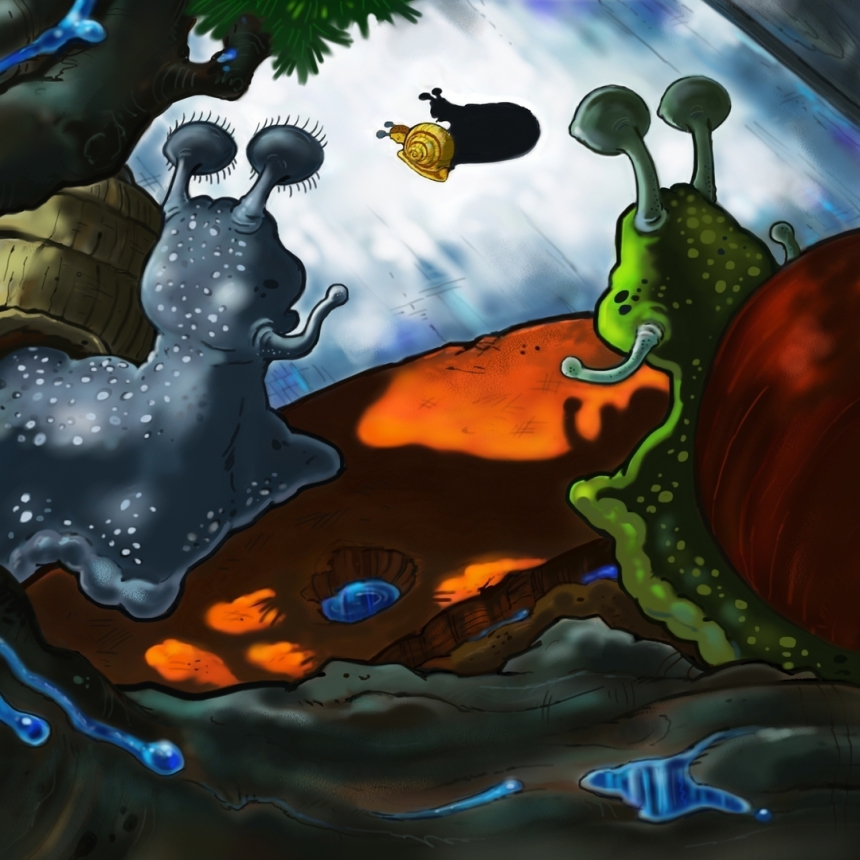 The snail is a small creature.  But Kaboor did not feel small.  He did not feel like he did not matter.  He did not feel that he was alone.  In fact, that was exactly the opposite of how he felt.  He did not know why, but here and now, approaching the last moments of his life, Kaboor felt very connected.  Cared for.  Almost like he was being hugged.

Time passed by.  And thought faded from his mind.

And in his quiet, calm stillness, Kaboor felt...Movement.  He could feel the Movement of the Earth.  And its motion was the most natural thing! 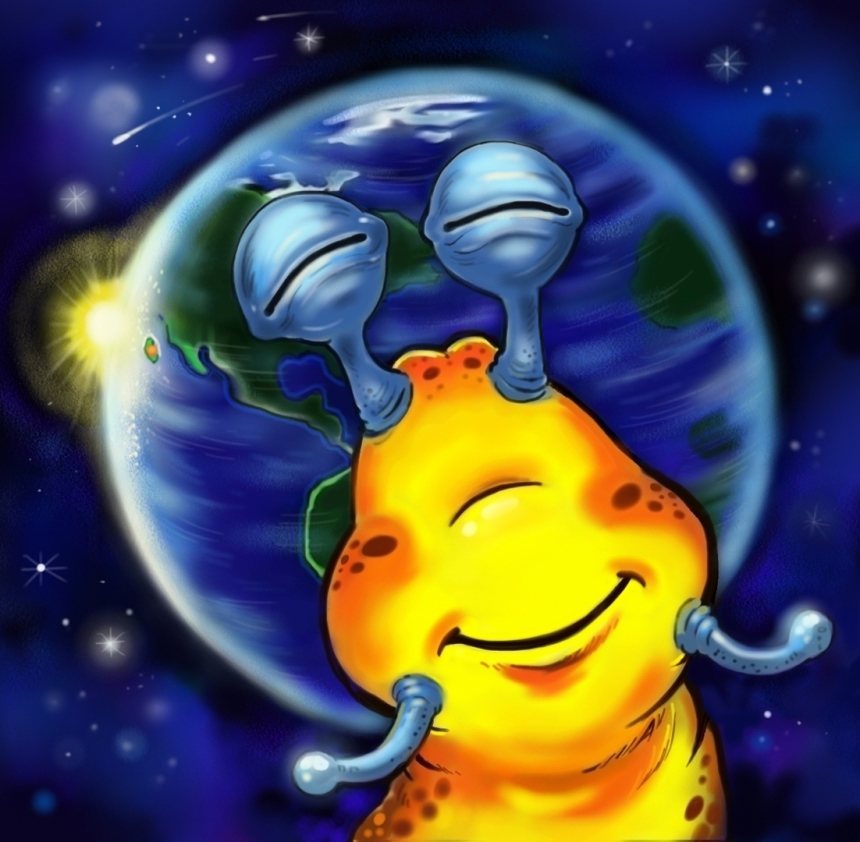 His eyes shot open.  The Great Light had moved!  It was now behind a great magnolia tree.  The base of the sill was now almost all in shade, and that is where Kaboor found himself now!

But he was still stuck!  His whole body was dry.  He could not move.  He worried and wondered what should he do?  What could he do?  Then he heard some familiar voices.

Jami looked around and saw the shimmer of water not too far away.  The morning rain drops had collected in a long, narrow crack in the sill.  The two hurried to it and crawled into the water.  They scooped up as much as they could into their shells and glided back to Kaboor.  Tor released his water around Kaboor's foot.  Jami climbed on top of Kaboor and released all the water from her shell onto her friend's head and body.  The cool liquid felt wonderfully refreshing on his skin. 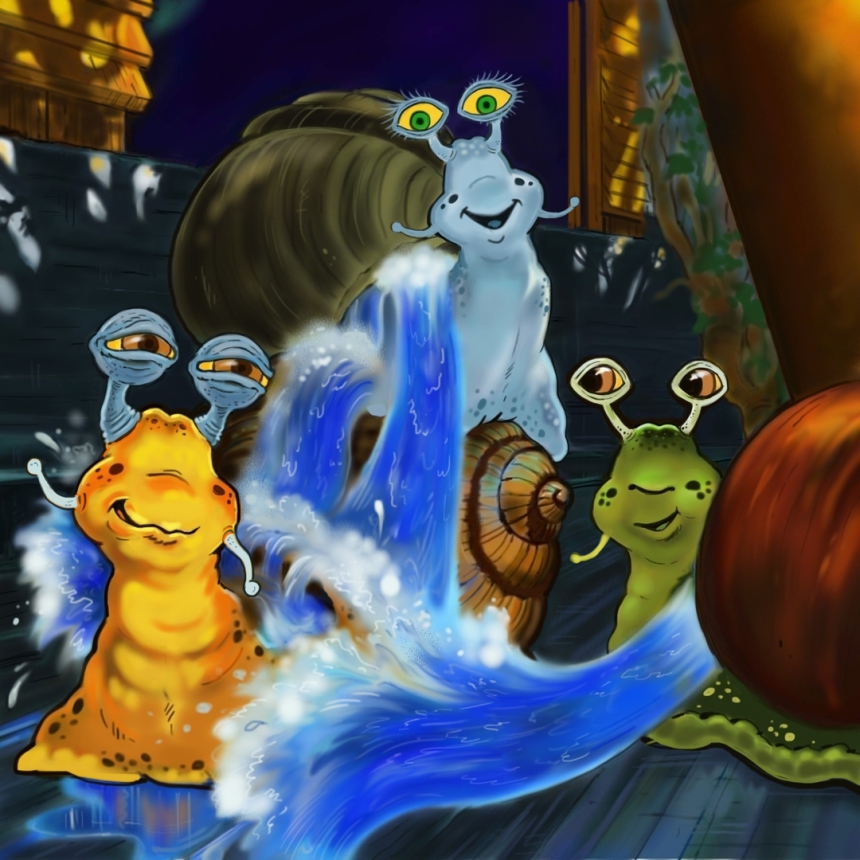 "And what has happened to your shell, Kaboor?  What's growing on it?"  Tor asked.

Kaboor turned his head to look at his shell and exclaimed, "Oh my goodness!  So that's what I was feeling while I was gliding in the Great Light!"

Jami and Tor circled his shell.  It was multi-colored now, with all sorts of growths on it.  Round yellows, red cubes, and clumps of green sprouted from his shell.

"Your shell has grown food!" cheered Jami.  She stretched her neck forward and scooped up some yellow drops with her lips.  They tasted brightly sour and fizzed on her tongue!

"These are the most yummy yellow drops I've ever eaten!" Jami declared.

Tor grabbed some red cubes and bit into one.  "Yumm!  These ARE wonderful!  So sweet and juicy!"  He quickly nibbled some more. 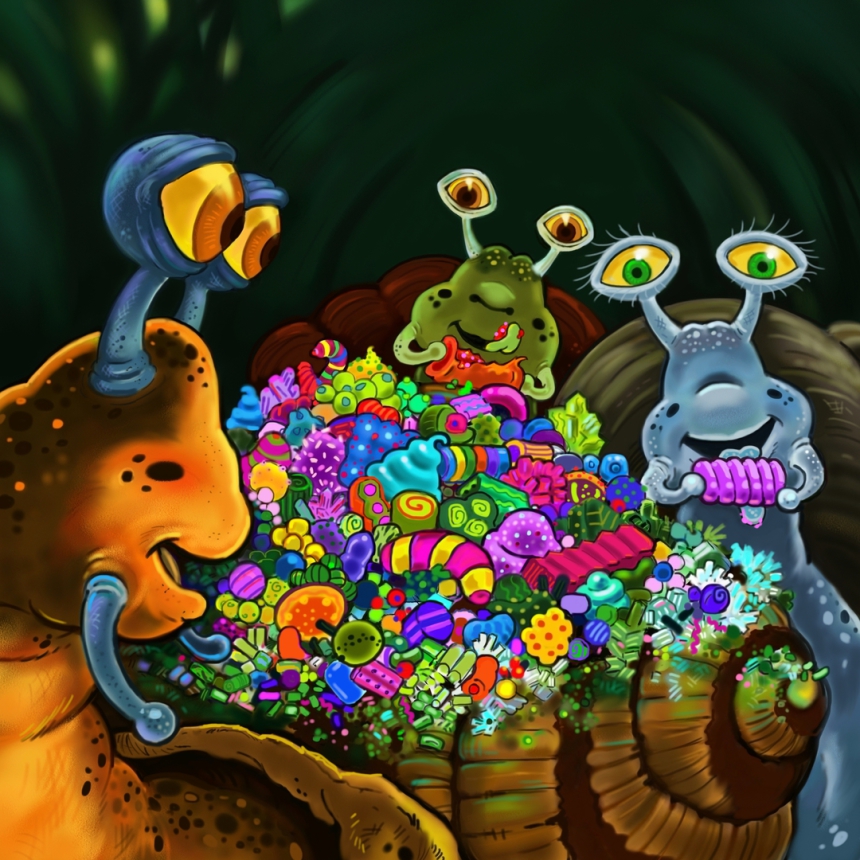 "I can't believe your shell has grown food!" Jami cried.  "Let's go back to the tribe and show them!  Can you move, now?"

The three headed back home as Kaboor tried to describe what being in the Great Light was like, and the Great Orb.  As they talked, they all feasted on the tasty treats that had magically grown on Kaboor's shell. 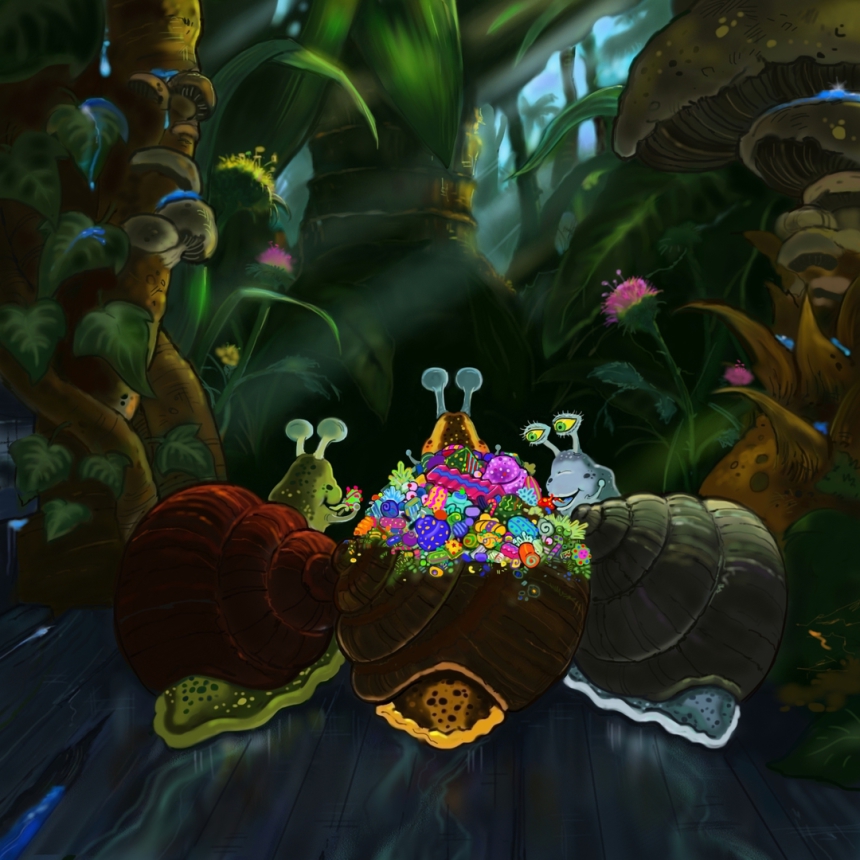