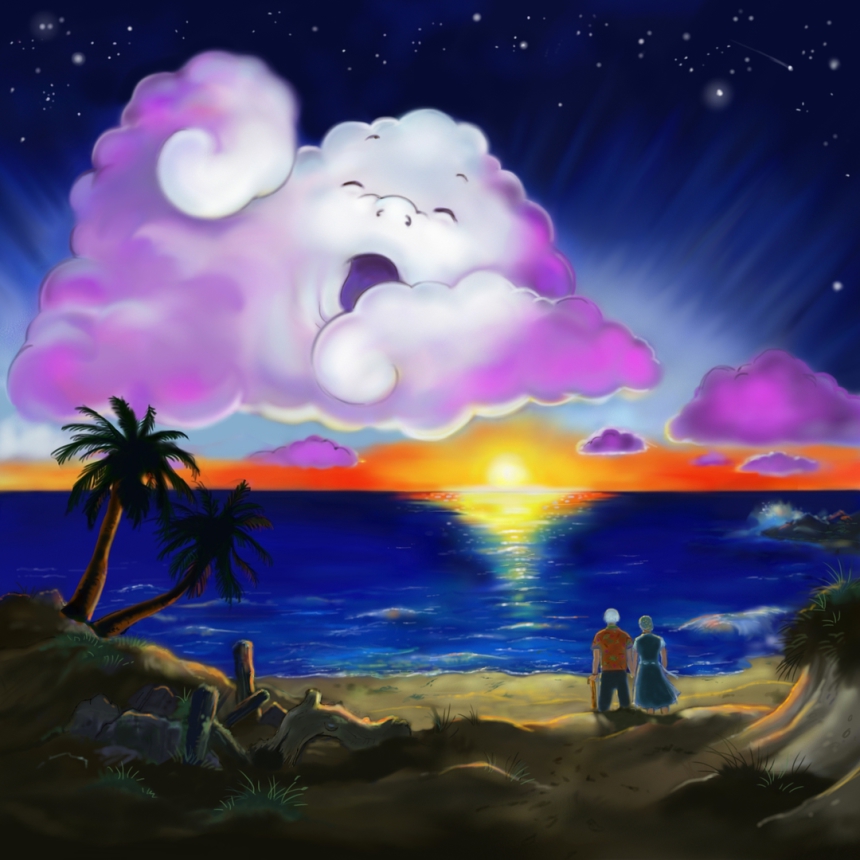 Cloud stretched out his white, puffy arms and yawned.  Morning.

The sun was coming up in the east, and white balls of Cloud lay at the horizon.    To the couple taking their morning walk on Islandtown, it looked like the sun was rising out of a bed of white balls of cotton edged with violet and gold.

“Oh!” they pointed and smiled.

Later in the morning, a gaggle of high-flying geese were heading south in a “V” formation.  Cloud formed two giant hoops in front of them.  To the children below, it looked like the geese were an arrow zooming through floating white rings in the sky. 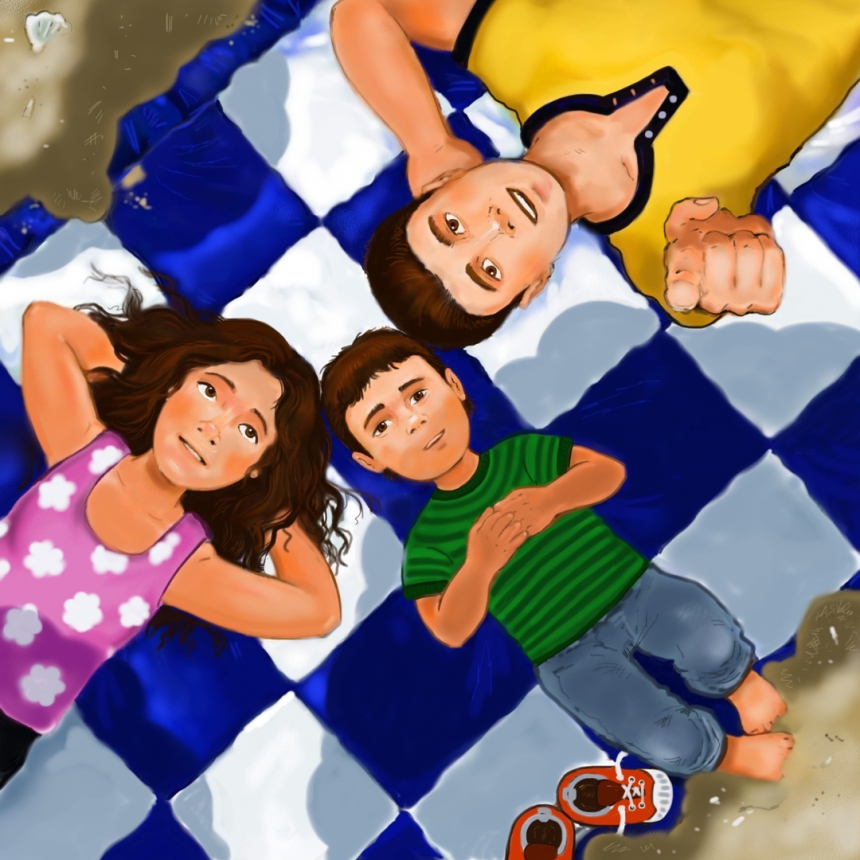 “Hey, look at that!”  Mark said to his two siblings, Sabrina and Omar.  All three were lying on an old checkered blue cotton blanket, doing one of their favorite things--- cloud watching.

“Wow!” gushed the other two.

Cloud saw and heard the children, for clouds have good ears, and smiled.  He thought, You ain’t seen nothin’ yet.

Cloud inhaled deeply and took in lots of air.  He grew and grew with each breath, house-size round puffs piling higher and higher on top of him.  Then he slowly released some of the moisture that he had inhaled, forming a light rain shower in front of the sun.  This, of course, created a rainbow.

“Hooray!”  the children yelled.   They lay on the blanket side by side, with Omar in the middle.  This was Omar’s favorite position.  He liked to lean his head this way or that, touching his head to Mark’s or Sabrina’s.

Cloud heard the children’s praise, and felt good inside.

“You’re not as cool as me!” came a deep, booming voice.

“Whoa!  Who said that?” asked Cloud.  He looked down at the Island.  East toward the shore.  West, South, and North over the water, but he didn’t see a thing.

“I said it!”  Ocean answered proudly.

Cloud peered into the water again.  This time he could make out the wavy, translucent eyes, nose, and mouth of Ocean.

“Where else would I be?”  asked the Ocean. 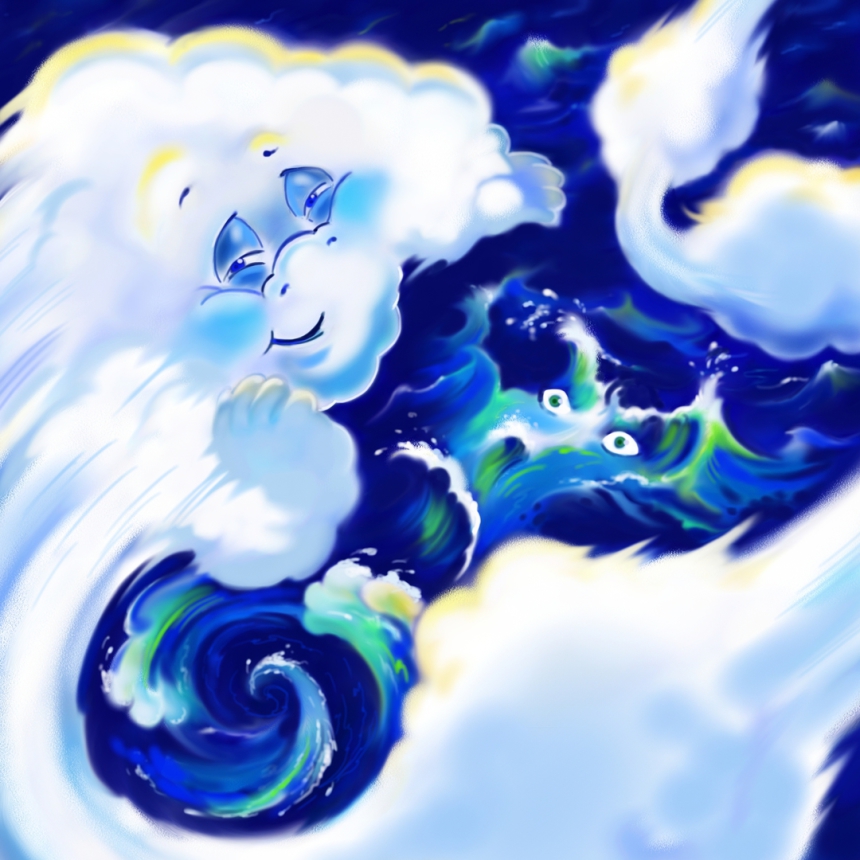 “Why do you think you’re so cool?” Cloud asked Ocean.  “You’re stuck down there.  You can’t fly to Africa like I can.  Or travel with the birds when they migrate south.”

“Who cares about that stuff?”  replied Ocean.  “I am so deep you cannot measure me.  I have millions of creatures living in my waters.  I am all over.  I encircle the world!!”

“Flying is a silly parlor trick”, Ocean said.  Though secretly he thought it was cool.  And he wished he could do it!

“I bet you wish you could fly”, taunted Cloud.  “Everyone does!  Flying is the epitome of cool!” Cloud half-closed his eyes and turned up his nose at Ocean.

Ocean became angry and threw a column of water up at Cloud, blasting a hole through him. 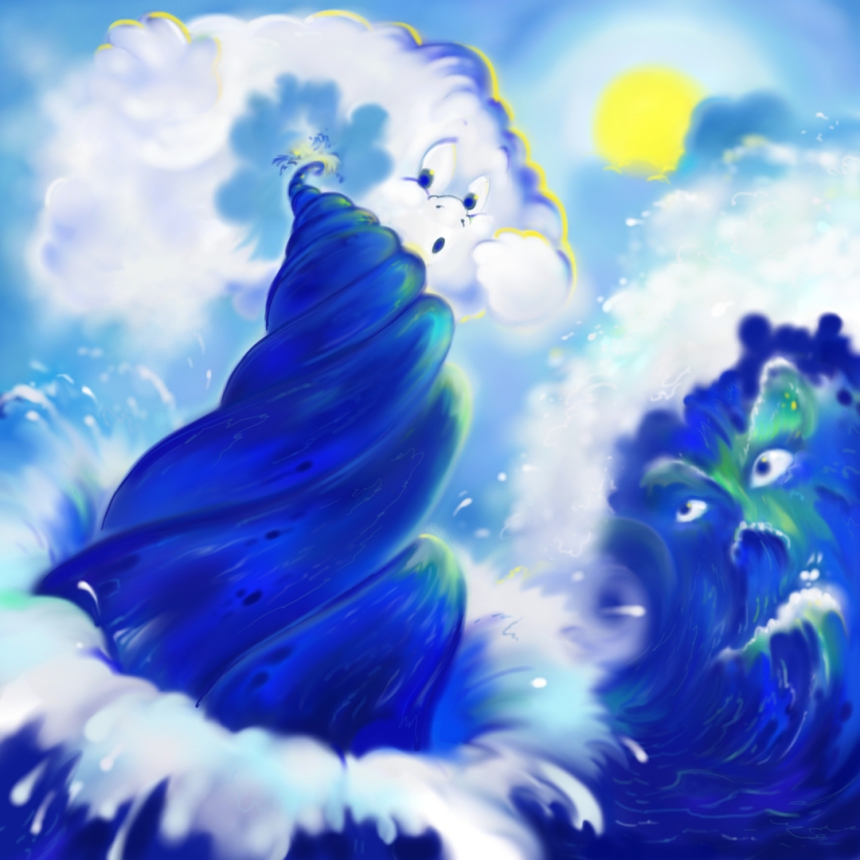 “Hey!” shouted Cloud.  He didn’t know Ocean could do that!  Not wanting any more holes blown through him, he hurriedly flew east, towards the mainland.

Ocean was still upset, but was glad he had at least silenced Cloud.  He didn’t want to hear any more of his taunts, so Ocean headed off in the direction of China.

Now Sun witnessed all the arguing between Cloud and Ocean.  She thought their taunting and boasting about who was the coolest was not right.  She wanted to teach both of them a lesson, and came up with a plan.

In the direction of Cloud, Sun withheld almost all her heat.  The air around him became very cold.  Cloud began to condense, losing all his puffiness.  He became droplets, and lost his Cloud form.  He got very dizzy, then he lost consciousness. 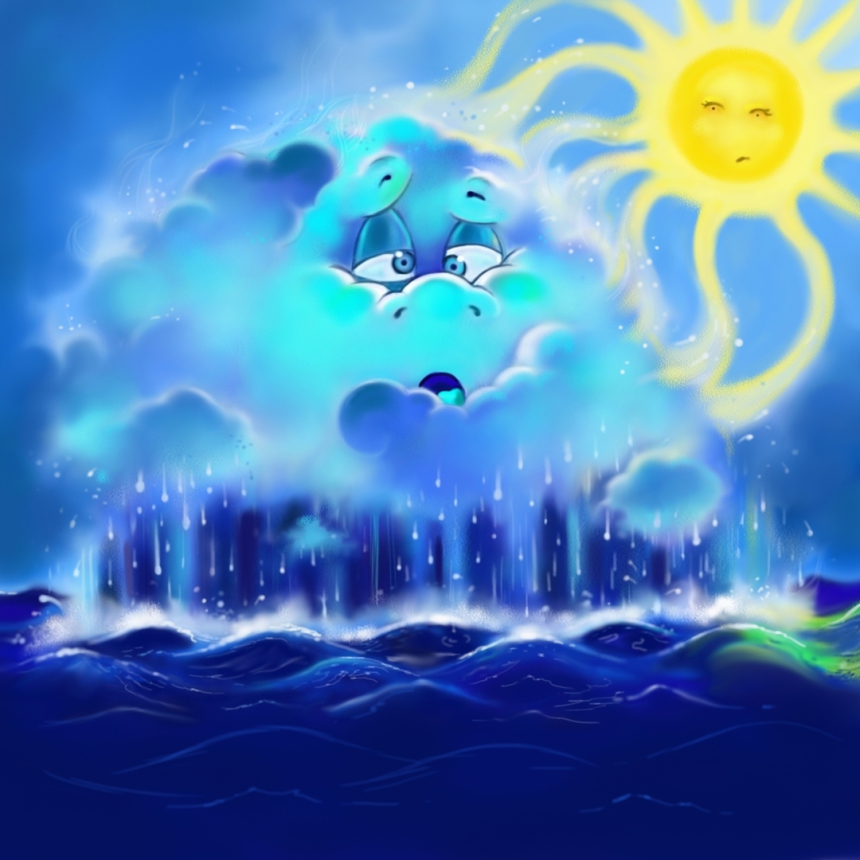 Unlike in a rain, when only parts of him fall to the ground, all of Cloud couldn’t stay together and all of him fell towards the earth.  Little by little, Cloud fell from the sky.  Soon the sky was completely clear, for every part of Cloud was now…in the ocean!

When he woke up, Cloud was in the water.  Or rather, he was the water.  He felt the water all around him, like it was all just behind his head.  Instinctively, he knew where all the water in the world was, for he was part of it.  And he was Huge!   Ocean was right!  Cloud-in-water felt Gigantic.  He was as big as the Earth.  He covered the Earth! 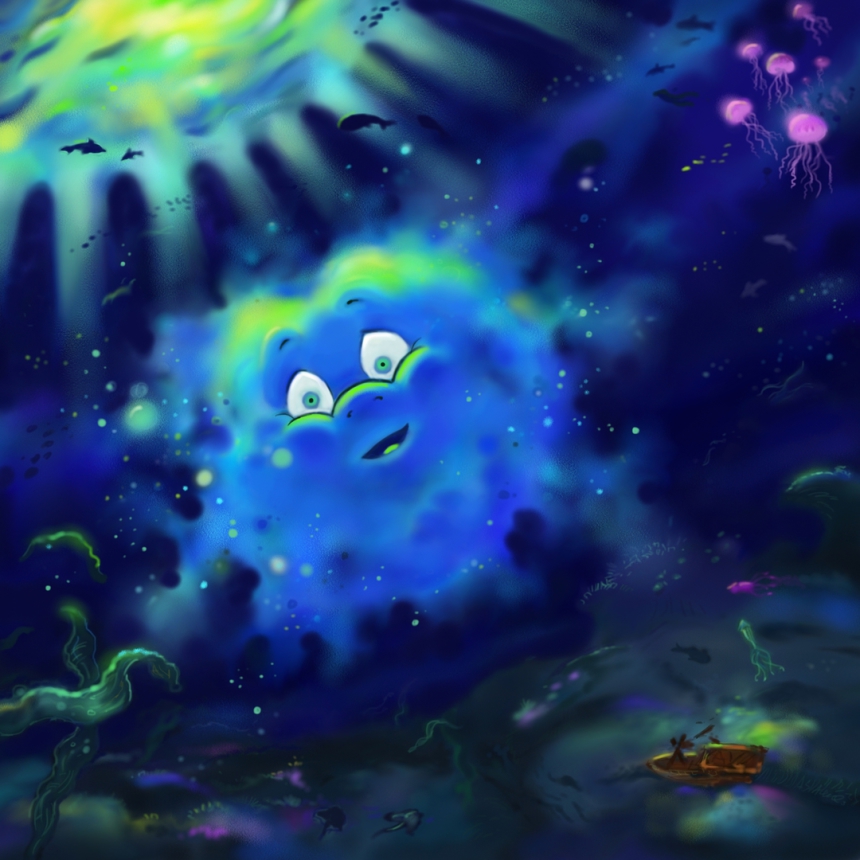 Cloud sensed all the animals that were in him!  Dolphins, whales, squids, octopuses, turtles, the number was endless!  And there were uncountable plants, too!  Sea anemones, seaweed, reefs, algae.  Cloud felt Awesome!

For three days Cloud remained in the water.  He played with a pod of dolphins off the Gulf of Mexico.  He swam with the seals and polar bears near the North Pole.  He played hide-and-seek with squids in a shipwreck.  He lazed around, basking in the warmth of the sun near the Islands of Samoa. 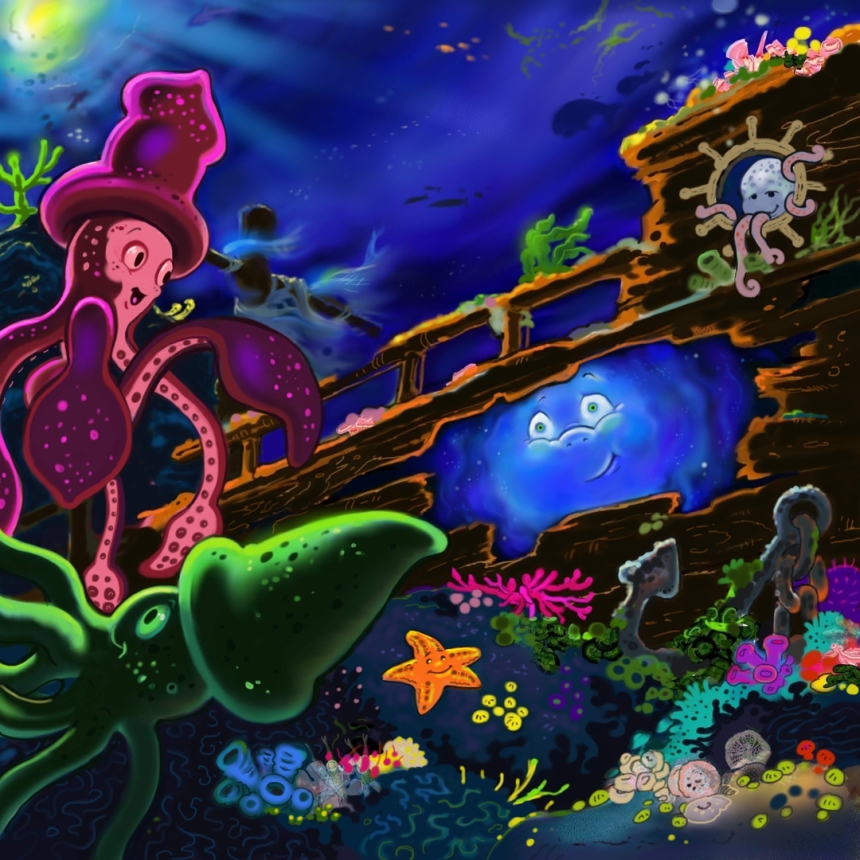 Sun saw how much Cloud enjoyed being in the water, so she decided it was time to return him to the sky.  She focused her heat on him, and parts of Cloud-in-water started to evaporate.  Like before, he began to separate into many parts, became very dizzy, then lost consciousness.

Sun then asked Wind to blow some dust into the area where Cloud was evaporating.  Wind sent some goose down, some plant pollen, and some cloth fibers from Omar’s white socks, which his mom had hung out to dry.  She blew the dust into the area where the Cloud was.  Moisture collected around the dust, and a hazy shape started to form in the sky.  Just east of the Island, Cloud woke up as a blanket of white.

“Whoa!  I’m a cloud again!”  he screamed!  He formed some puffy cloud hands and touched his face just to be sure. 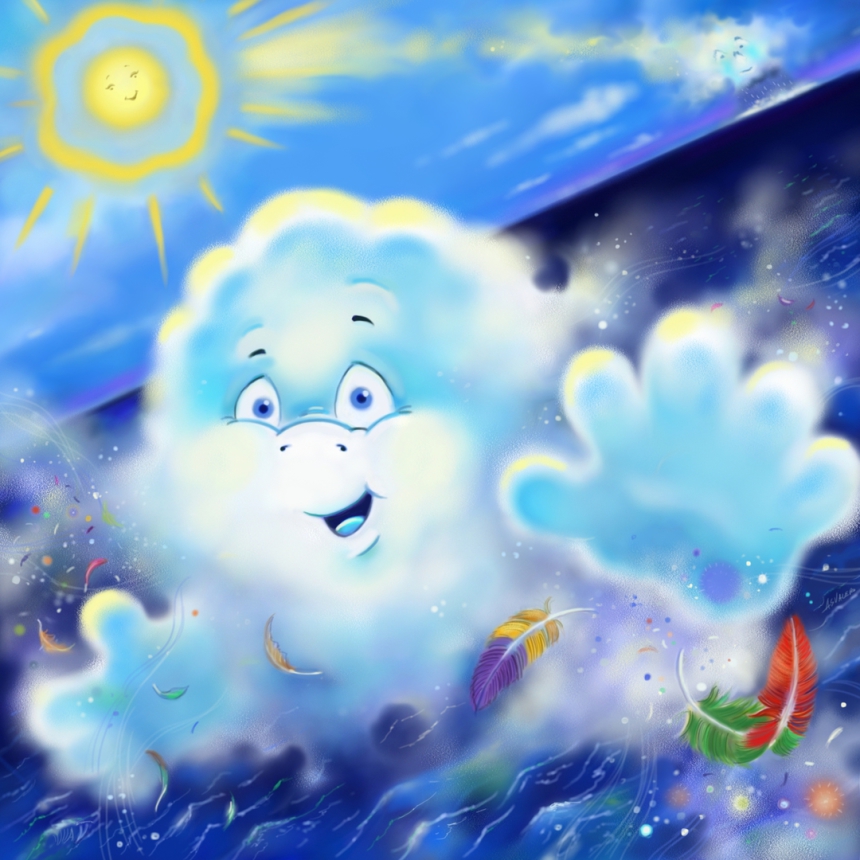 “Being in the Ocean was awesome!  So Huge!  And now I am a cloud again!  I am free!”  Cloud stretched the limits of himself across the sky.  He became one long string of white fluffiness.

“Pretty nice string, there, Cloud”, said a familiar deep voice from below.

Cloud looked down at the water.  “Oh!  Hi!  I have to tell you about what I just experienced, Ocean!  I found out what it’s like to be you.  You’re awesome!  So large!  And you have so many animals and plants in you!”

“Why thank you, Cloud.  I appreciate your remarks.  Truly, I do.  For you weren’t the only one to experience something cool.  I found out what it was like to be you!”

“There was a heat wave off the coast of China and large parts of me evaporated into the sky.    I found more of myself drifting up, up, up.  All of a sudden I was there in the sky.  A cloud!  Being a cloud is incredible!  There are no words to describe flying in the sky.  I never felt so free!  I experienced the birds flying through me, felt the thrill and zap of lighting, and heard the roar of thunder.  What a wonderful life you live!” 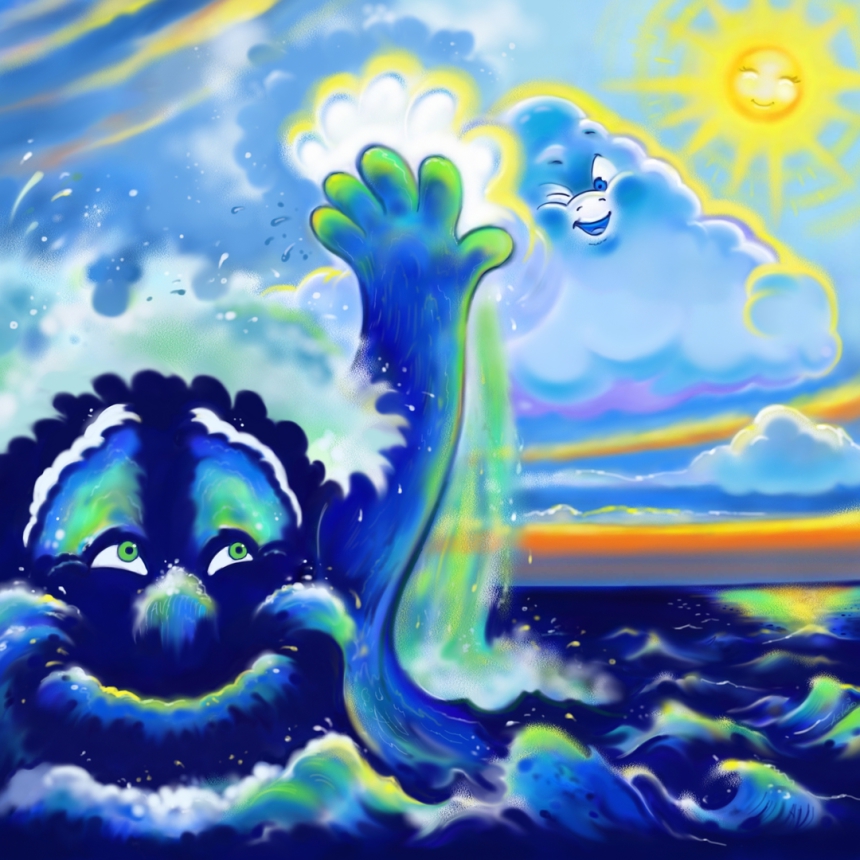 “Well, I guess we better go home now guys.  The clouds aren’t doing much of anything now.”

Lying on the ground, she turned her head to look at Omar.  Then she sat up and turned to Mark.

“You think we should wake him?” she whispered.

Mark sat up, too.  He looked at Omar and shook his head.

So Mark took Omar gently into his arms, Sabrina folded their blanket, and the three made their way back home. 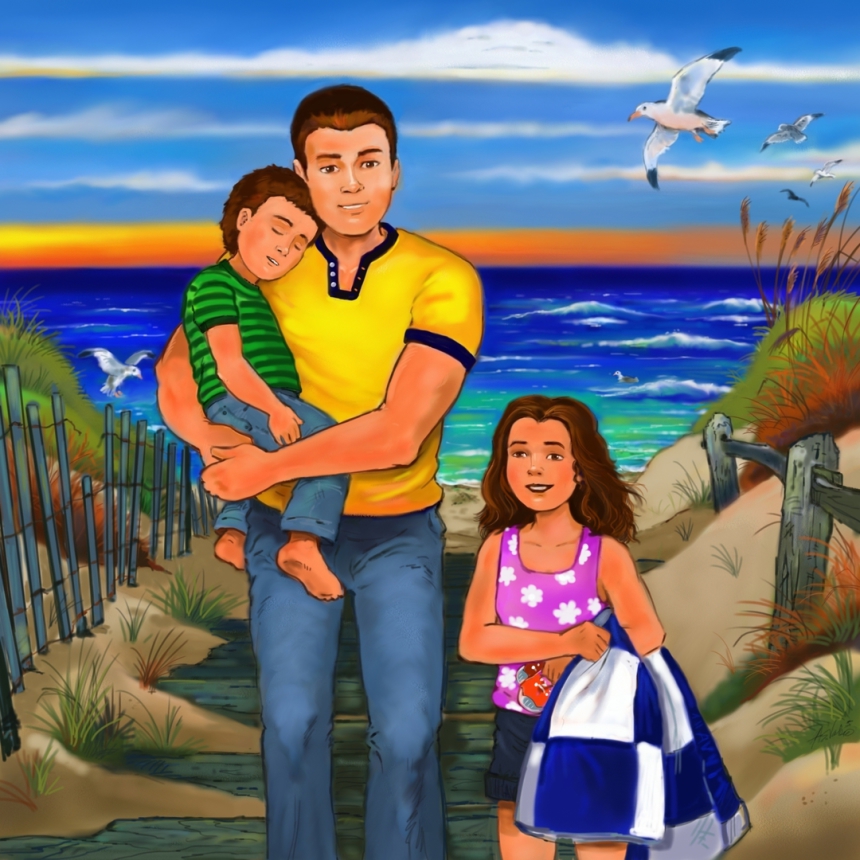