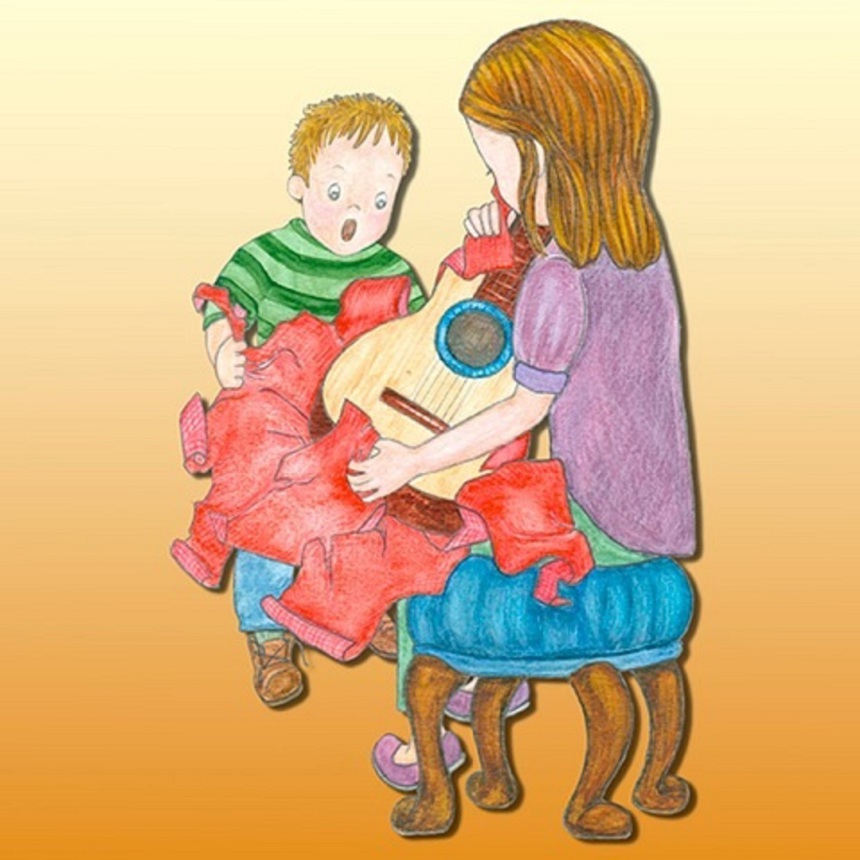 Sabrina held her breath as she tore the shiny red paper.

Out of the gift wrap emerged a shiny new guitar.  It had a cedar front, mahogany body and neck, and was small in size---perfect for Sabrina.  A sapphire border encircling the sound hole and tuners of sterling silver added to the instrument's striking beauty.  Rich tones filled the room when Sabrina plucked the strings.  She hugged her guitar close and named her "Jolie".

Sabrina's parents were overjoyed that their present made her so happy.  It was four years ago that they started their daughter on guitar lessons.  Her teacher said she was doing well and that she had true talent, so for her ninth birthday they had this guitar made for her.

Sabrina took Jolie outdoors whenever she could.  Among trees, flowers, and animals was her favorite place to play, for she heard music in nature.  To her, the fall wind seemed to blow in A minor, slightly sad.  Today's sun sounded like D major, bright and happy.  And the gray clouds after a rain?  B minor.  Mysterious.

Likewise, nature seemed to enjoy Sabrina's music.  The animals, in particular, would gather near her when she played her guitar.  At the back of her house, she'd rest against the willow tree and its soft trunk would support her.  The house cats, Maurice and Sheila, would come out of their hiding or napping places and lay near her. 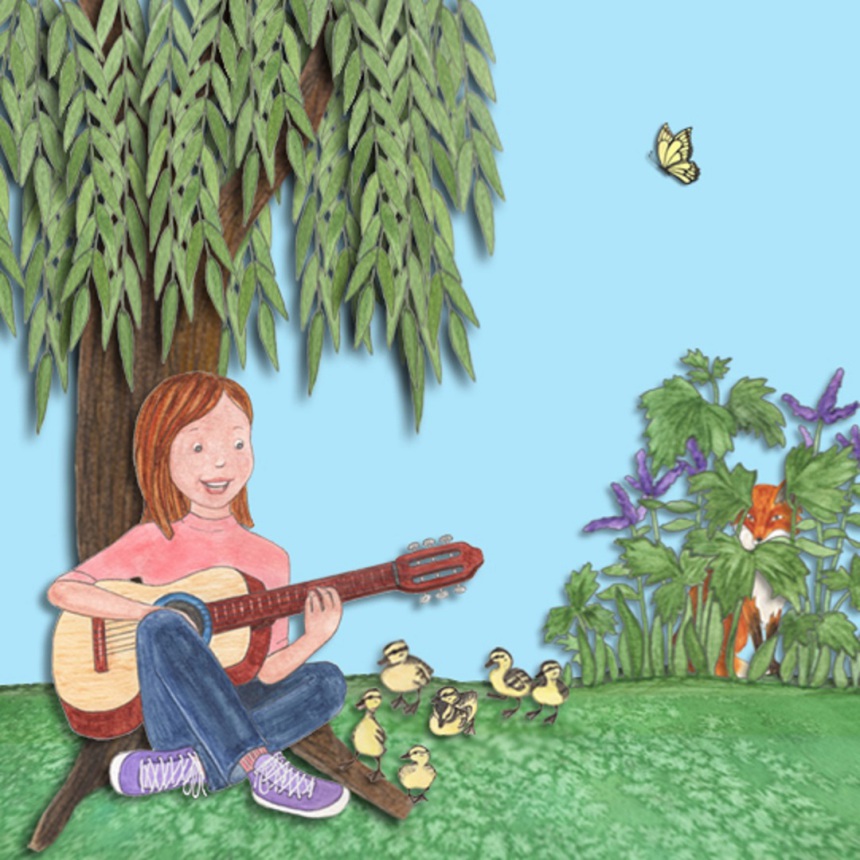 The yellow finches and red cardinals would gather on nearby branches, sometimes joining in.  Were they trying to make music with her?  She hoped so.

This spring a family of ducks often came near when she played.  There were seven ducklings in the family.  They showed up so regularly, Sabrina started to bring them food---small pieces of homemade bread.  Eagerly they would come up to her and eat off her hand, their bills sometimes pinching her palm.

At first, Sabrina thought all the ducklings were the same.  But gradually she learned that each one had his or her own unique personality.

Anna was graceful and never liked to get dirty.  Belinda was always quacking and never seemed to shut up.  Christopher was full of energy, reminding her of a boy in her class.  He was always in motion, looking under leaves, digging into the ground for roots or berries.  Behind the father and mother, Christopher led the line of ducklings wherever the family went.  Sabrina named the other ducklings David, Edwin, Franklin, and Glen.

One Spring Saturday, Sabrina walked out to the yard with a bag of bread and her guitar.  After a few minutes of playing the duck family waddled up to her and she started to feed them.  She noticed Christopher was moving slowly and wondered if he was sick. 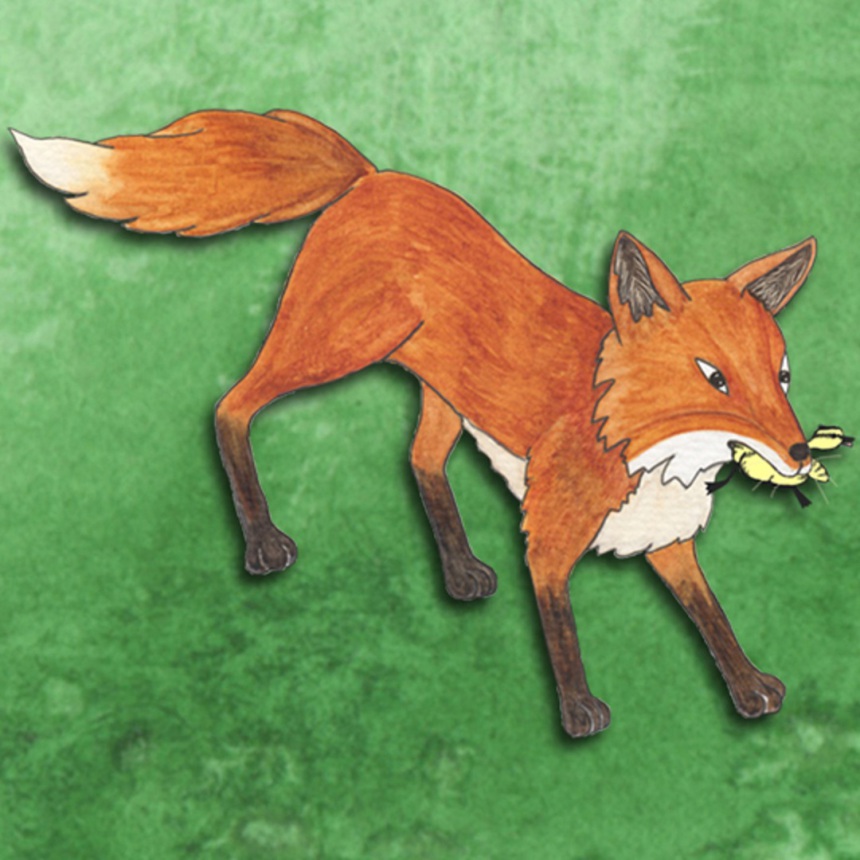 Maybe he’s caught a cold, thought Sabrina.  She went back inside and brought him a saucer of orange juice.  Then she returned to her music and the ducks wandered around the yard, looking for more food.

Sabrina played a happy song.  A breeze blew gently through the long leafy branches of the willow tree.  The sun shone every now and then, peeking through the large billowy clouds in the sky.

Sabrina daydreamed, enjoying her music and the wind caressing her skin.  Then she sensed some movement in her peripheral vision - a small form, reddish, crouching near the bushes.  Before her eyes had time to bring its shape into focus, the form shot out toward the ducklings.

"Fox!" Sabrina yelled.  She jumped up and ran to the ducklings when she realized what the fox was about to do!

All the ducks heard Sabrina’s scream, saw the fox coming, and scattered.  All but one---Christopher, who was in a daze and confused in all the movement and sound.

The fox snatched him with its mouth and scurried back in the direction from which he had come.

“Christopher!” Sabrina shouted. “You come back here you blasted fox!”

An athletic girl, Sabrina excelled at sports and ran very fast.  Her protective instincts kicked in and made her run even faster.  As speedy as the fox was, she caught up to it.  She gripped Jolie by the neck and hoisted the guitar above her head, taking aim to smash the fox with it.

The fox, however, was quicker than Sabrina in changing direction, and as they ran this way and that over the grass, Sabrina kept bringing the guitar down on air as the fox would always change direction just as she swung down to hit him.

Sabrina still had hope that Christopher was alive.  As she chased the fox, she could see his yellow head, shocked but open eyes, and part of his wing peeking out of the fox’s mouth. But she knew his chances became slimmer and slimmer the longer he stayed in its mouth.

I hope he doesn’t swallow Christopher up! she thought.

Running zigzag, the fox was heading out of the yard and getting closer to the bushes and trees.  Sabrina knew that if he reached them, there would be no way she would catch him, and that would be the end of Christopher! 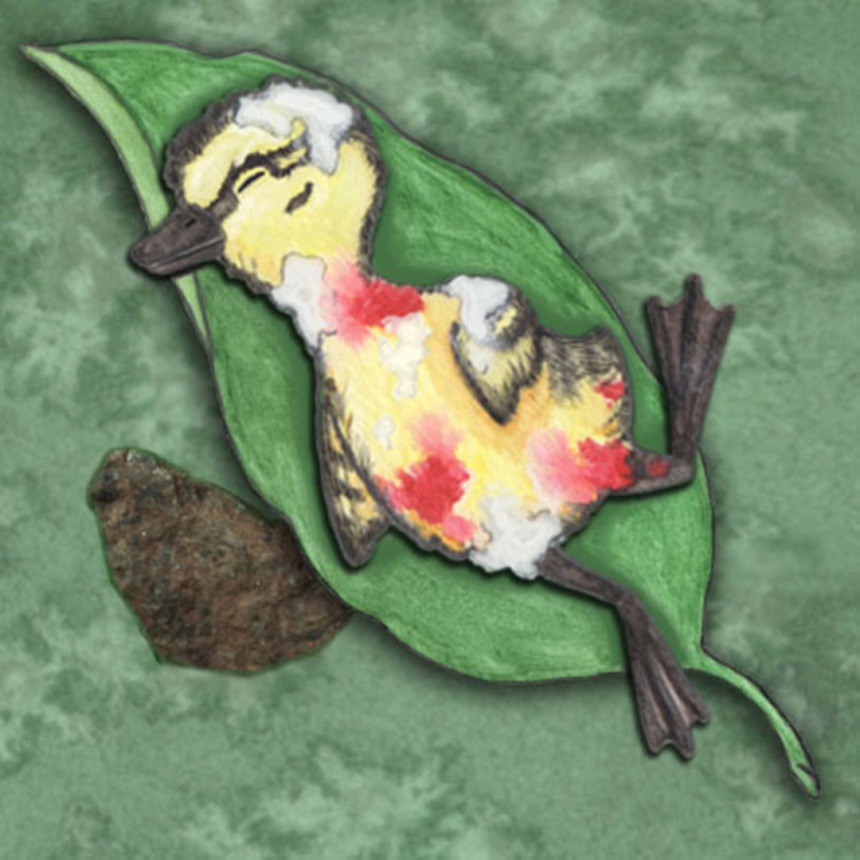 Sabrina was desperate, and then an idea came to her!  The fox was running towards her left.  She faked a swing towards him then changed direction towards her right at the last minute. Just as she hoped would happen, the fox ran right under the guitar.

She hit him clean right on top of the head.  The fox coughed up a yellow ball of slime then continued to run towards the bushes, but now more slowly and haltingly, with its head hung low. Jolie had made quite an impression on him!

Sabrina stopped chasing the fox and turned back towards Christopher.  Her heart dropped. Then her knees dropped.  She bent down to take a closer look at him.

She gazed at the duckling, or what was left of him.  Covered in saliva and blood, his left leg bent unnaturally upward and outward.  His eyes were closed. 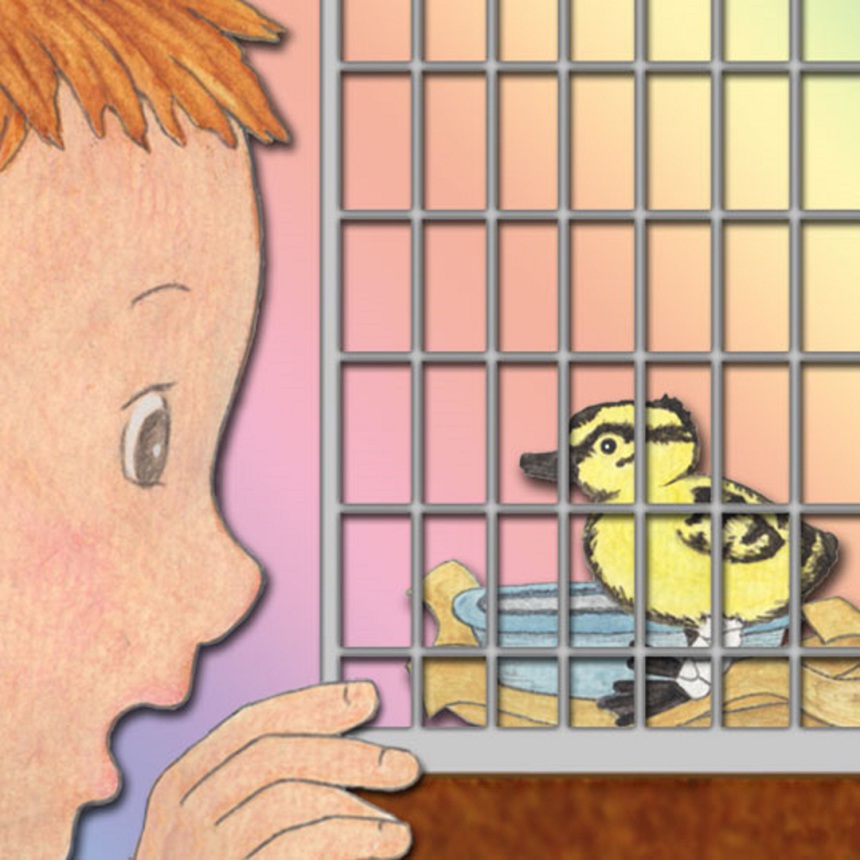 She found a large leaf and ever-so-carefully slipped it under Christopher’s body. He was still breathing and that gave her hope. Quickly she walked him back to the house and called her mom for help.  Realizing the duckling needed care from a vet, she made a phone call and the doctor agreed to see Christopher right away.  He applied some antibiotic to the wounds and carefully bandaged Christopher up.  He gave Sabrina’s mother instructions on how to keep his wounds clean and told her to keep the duckling warm. A lot of his recovery would depend on luck, the vet said.

Christopher had many wounds, most of which were minor and would heal.  However, his main injury was to his left leg, which was now bowed and crooked. The doctor put it in a mini-splint made from a popsicle stick, but he said if Christopher did manage to heal enough to walk again, he would do it with a limp.

Over the next few days Sabrina, with her mom’s help, took care of Christopher. She kept him warm and gave him water and food. Sabrina’s younger brother, Omar, helped too.  He visited Christopher often throughout the day, standing tip-toe to view him in his wire cage, which was kept on the kitchen counter. 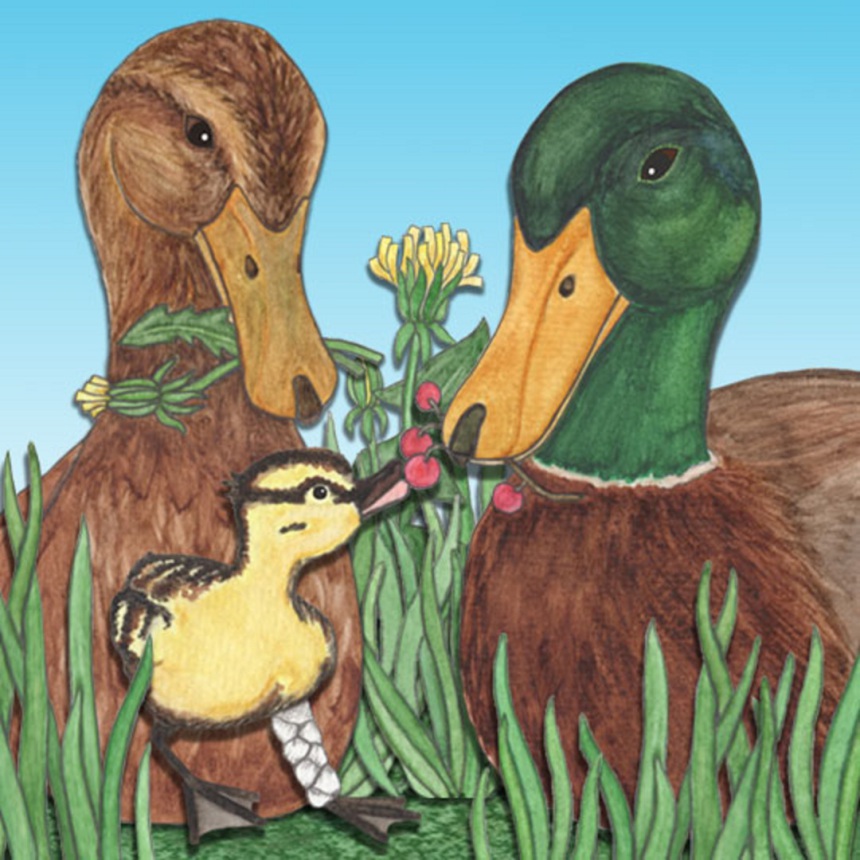 Sabrina and Omar were happy to see that Christopher made quick and steady progress.  His boundless energy came to his aid during recovery.  His breathing became stronger and he was able to hold his head up.  Slowly he tried to get on his legs and both Sabrina and Omar cheered when they saw him one day limping around in his cage.

Sabrina and Omar brought him outside as much as possible so he could see his family and they him.  Anna and Franklin, as well as his parents, regularly brought him seeds and berries.

A week after Christopher was hurt, they brought him to the vet again, and he removed the splint.  Christopher was able to walk, but he did it in a funny wobbly way.  His left leg was crooked, and swung upward and outward whenever he took a step.  Still, considering what he had been through, Sabrina was thankful that he could walk at all. 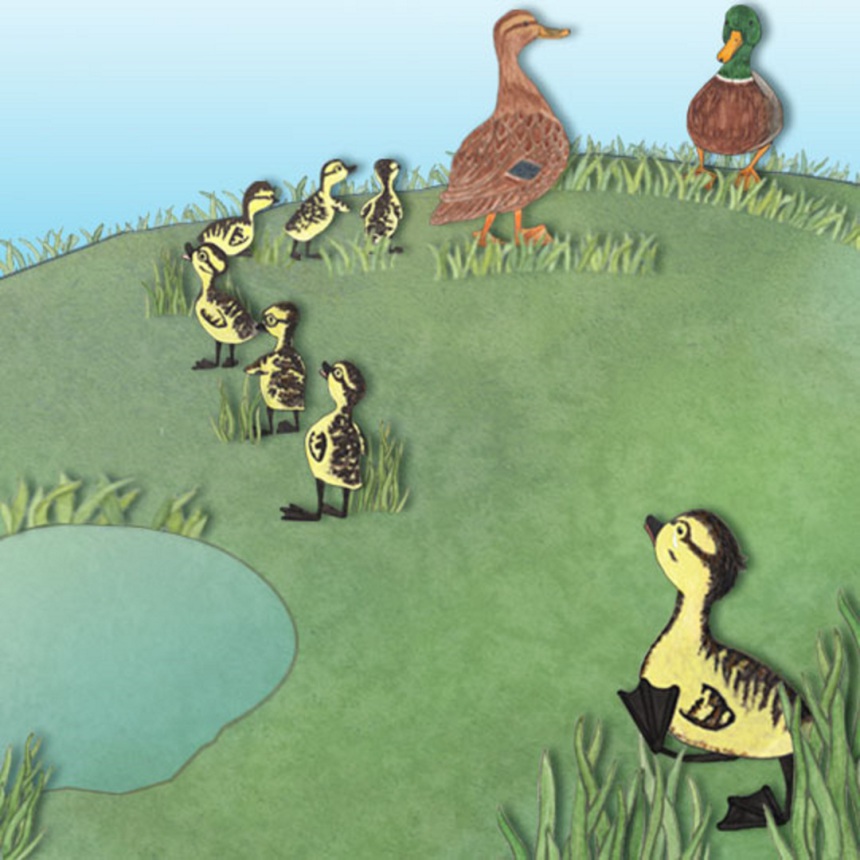 Christopher’s family accepted him with much fanfare and quackery. His mother doted on him that whole morning that he was released from his cage.  When it was time for the family to go home, Christopher took his place among the 7.  But now he was at the end of their line. With his injury, he could barely keep pace, so he could no longer lead.  Yet Christopher was determined to stay with his family.

Over the next few days, Sabrina would be playing her guitar outside and the ducks would gather near her or waddle by.  Their line was the same, but now different.  Christopher still had that limp. And that made Sabrina feel terrible.  She heard the C minor chord now, a sad-sounding key, whenever she saw the ducks moving in line and Christopher’s wobbly walk trying to keep up.  His life had been perfect she thought, and then the fox attack changed all that.  What was once happy was now sad to her.

But then, the next week, Sabrina was walking home from school with Omar.  The school building sat on top of a hill, and down in the green valley below, she saw a familiar moving line---two ducks followed by 7 smaller yellow dots.  Sabrina was so far from them that she couldn’t make out Christopher from the others.  From a distance, all the ducklings were in perfect alignment, perfect form. 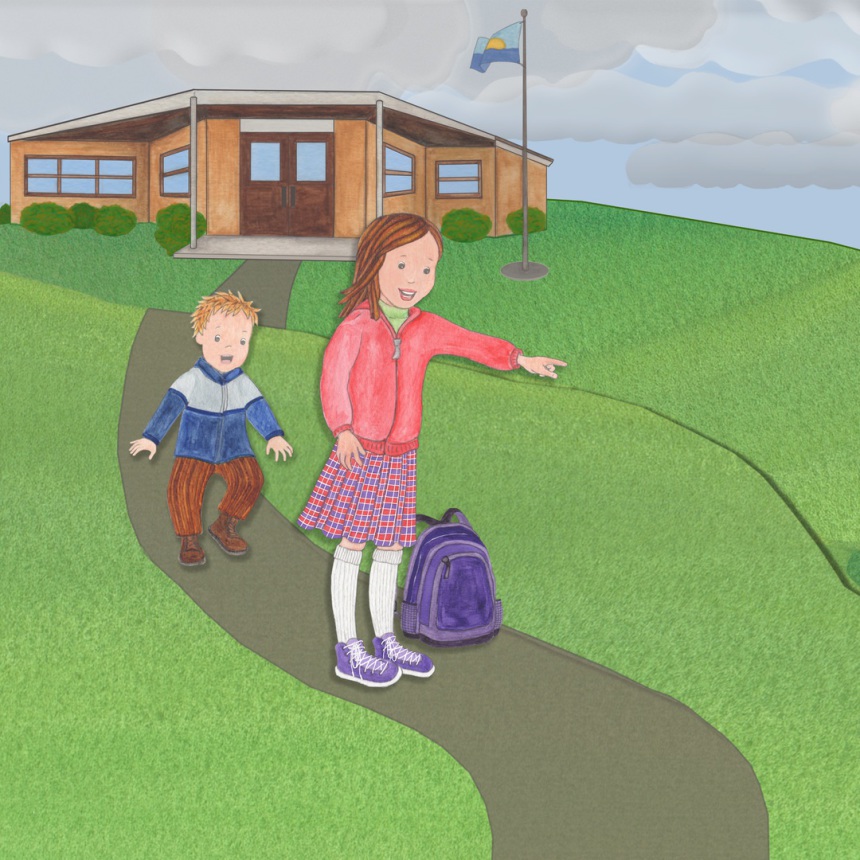 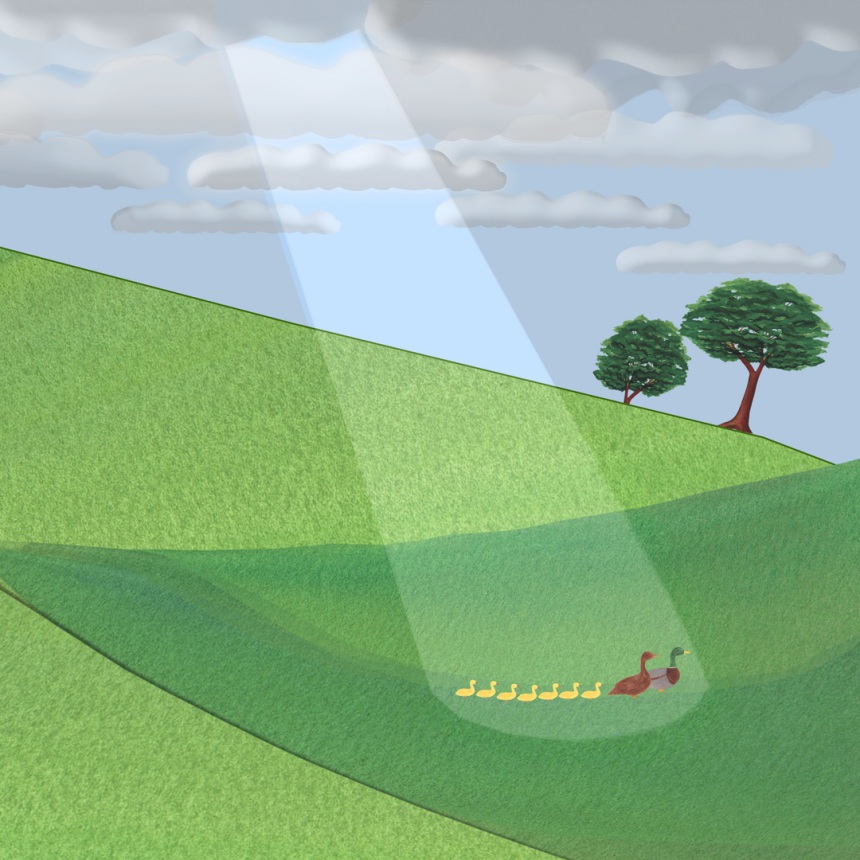 Summer, then Fall came, and the ducks flew south and Sabrina did not see them for a long time.  Then April came and one day as Sabrina was walking on the beach, she saw a flock of ducks flying overhead against a bright blue sky.  A few of them, much bigger now, she recognized.  She waved to them.

One of them she could have sworn was…

“Boy! He’s flying so regally, so effortlessly...” she thought as she watched him.

“Christopher Major!!” she yelled as she waved her arms frantically at him. 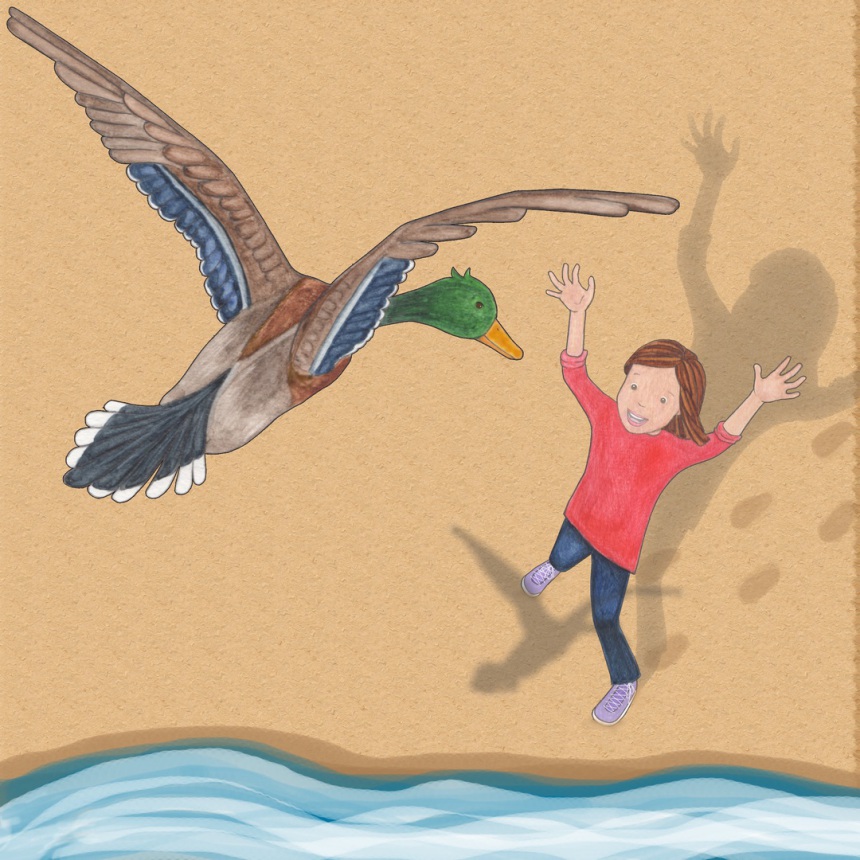 Sabrina returned home, brought her guitar out to the porch and played. She strummed the blowing wind, plucked the warmth and brightness of the sun, and kept time with the swaying trees. Her fingers wove the story of Christopher.

The sound from Jolie had changed because of the small dent, now repaired, in her body. Some had said  the tone didn’t sound as good as before. But, to Sabrina’s ear, the music had only become more beautiful. 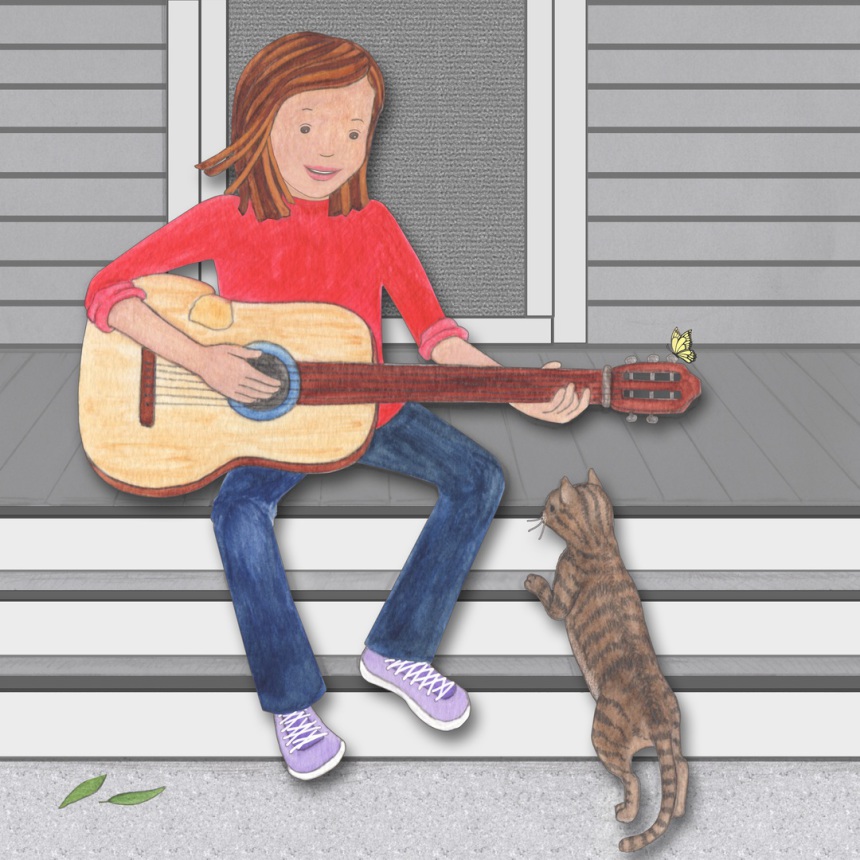